How to ideate and build a profitable idle arcade game

Idle arcade games have become the hyper-casual genre to watch, with new titles launching weekly and maintaining strong profitability for months at a time. It’s this profit potential and strong in-game metrics that make these games particularly appealing for developers. Even though marketability tends to be lower than other hyper-casual genres with an average CPI around $0.50, in-game metrics and LTV tend to be much stronger, like an average D0 playtime of 1200s-1800s. The more time users keep playing, the more opportunities for monetizing with ads and in-app purchases and the higher your profit potential.

So how can you take advantage of this trending genre and build a profitable idle arcade game? Zvi Mehlman, Senior Publishing Manager at Supersonic, and Uri Ron, Market Research Expert at Supersonic, share their tips and insights on the genre, from ideation to creative best practices. Keep these in mind as you work on your next idle arcade concept to ensure you’re maximizing performance and profitability potential. 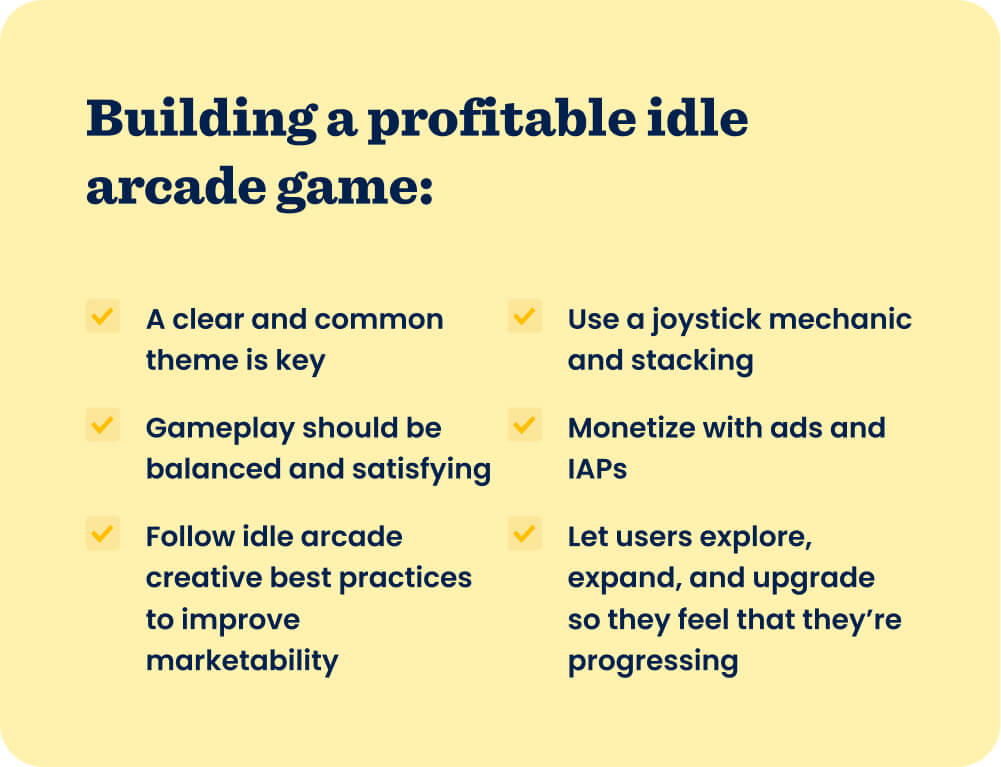 The key features of an idle arcade game

Idle arcade games didn’t spring up out of nowhere - they trace their origins back to two casual genres: casual and adventure. Both of these have the upgrade, hire, explore, expand, and resource collection characteristics - and emphasis on progression - that are signature elements of idle arcade games.

But idle arcade adapted these casual features to suit a hyper-casual audience by simplifying gameplay, introducing a joystick mechanic, and stacking resources. As you think of your next idle arcade concept, keep in mind the other distinguishing features of this genre:

Including these elements keeps users engaged, enhances the satisfaction of gameplay, and boosts in-game metrics like retention and playtime.

Coming up with a great idle arcade concept

Ideation is one of the hardest parts of game development. To make it smoother, faster, and easier, there's this handy ideation kit and the following tips you can keep in mind when thinking of your next idle arcade hit: 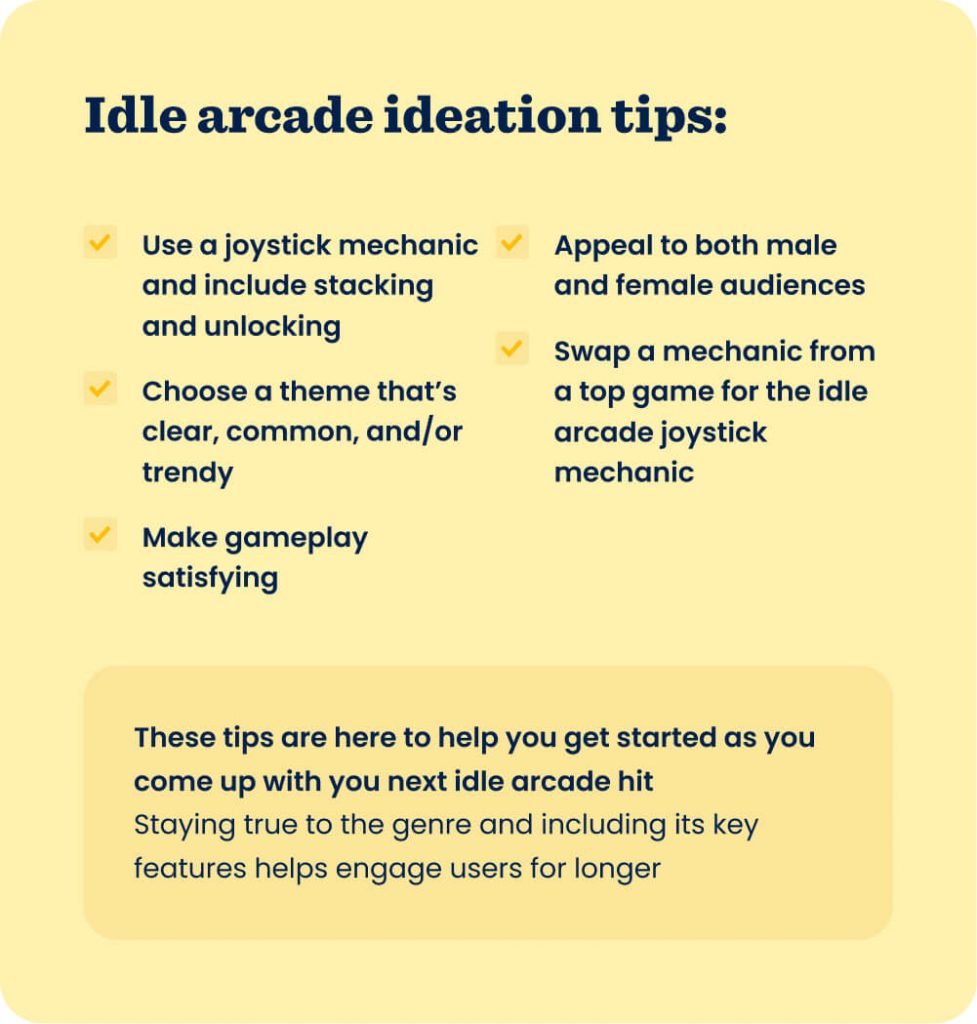 Striking the right balance with your game

As you begin building out your idle arcade game, it’s important that you strike the right balance of input and output. This refers to giving players the feeling that they’re getting enough in return for what they put in. In My Mini Mart, there’s a balance between the resources players need to collect (the input) then give to receive an upgrade or unlock a new feature (the output). This collection and spending of resources progresses the game forward and creates the feeling of servicing others - players are stocking shelves so customers don’t have to wait.

As this example shows, in idle arcade games that feeling of balance between input and output is created with resources - and brings up the concept of “no resource left behind”. Players need to utilize the resources they collected from the start of the game. Even as they progress through the levels and unlock new resources, features, and tools, they still need to use that original resource. For example, users can start out harvesting tomatoes. Then they can unlock the ability to feed tomatoes to chickens and get eggs. They can still sell the tomatoes as-is, and they can use them to feed the chickens for eggs that they then sell for more money. Basically, players always need to keep growing tomatoes. Incorporate this concept in your game by making sure users still need the initial resources as the game progresses, and that they connect with other resources.

The look and design of your game is also important to keep in mind as you begin building it out:

Once you have an idle arcade concept and have begun building out your game, at the same time you can start improving marketability - lowering CPI will help your title scale affordably. This all starts at your creatives. Just like any other hyper-casual genre, it’s important to nail your creative within the first five seconds. With idle arcade in particular, there are a lot of features in a game that can overwhelm users - the goal of your creatives should be capturing players’ attention without showing them too much of your game. This means making sure the gameplay is shown clearly and at normal speed. Part of this clarity is highlighting the flow of your game and the extent to which users can collect resources and progress.

For example, in Pro Builder, the creative shows the character stacking a huge supply of wood to build the structure. This shows off the satisfying elements of the game and gives a peek into the other features, like the yellow bricks they could use as a resource and the wood cutters helping the character collect resources faster.

You should use a zoomed in perspective in your creatives. This lets users know more clearly what actions they’ll need to take and how the game progresses. In My Mini Mart, zooming in highlights the task of stacking the tomatoes to give to the waiting customer, and shows players the option to upgrade the tomato plant.

Another way to highlight gameplay is gray out the background and put the elements you want to focus on in a bold color, like green or yellow. This takes the black and white trend seen in other hyper-casual creatives and applies it for idle arcade  - and it’s working.

With an engaging game and the right creatives to attract users at scale, you can then optimize your monetization strategy to maximize revenue from each of these players. Idle arcade games often use a mix of ads and in-app purchases to generate revenue, with rewarded videos among the most popular ad placements.

Time is money for idle arcade users - they often need to wait to generate enough resources to unlock the next feature. They’ll pay for an IAP or watch a rewarded video to speed time up so they can progress faster. You can also present users with an IAP or RV for them to get an upgrade, like improving equipment, hiring an assistant, or increasing character speed. Take advantage of this by giving users the option to make a purchase or watch an RV at various points throughout the level and integrating it in your UI. 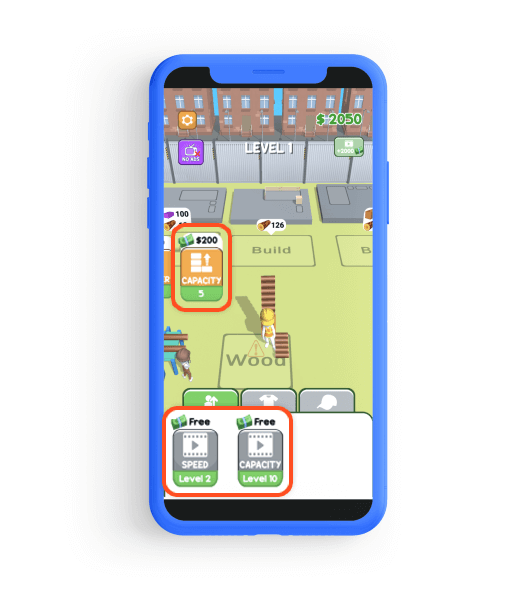 These monetization strategies all relate to the core feature of idle arcade games - progression. Users want to unlock, upgrade, and explore as they play, and completing these actions more quickly gives them a greater feeling of satisfaction and increases engagement.

Strike the iron while it’s hot

Take advantage of the high profitability and popularity of idle arcade games while this trend is still at its peak. Keep in mind the tips above that cover each part of publishing, from ideating an engaging concept to maximizing profitability with the right monetization strategy. Have an idle arcade concept you’re ready to test? Submit it here

This article is based on Zvi and Uri’s presentation at SuperMonday. You can catch the full webinar below: 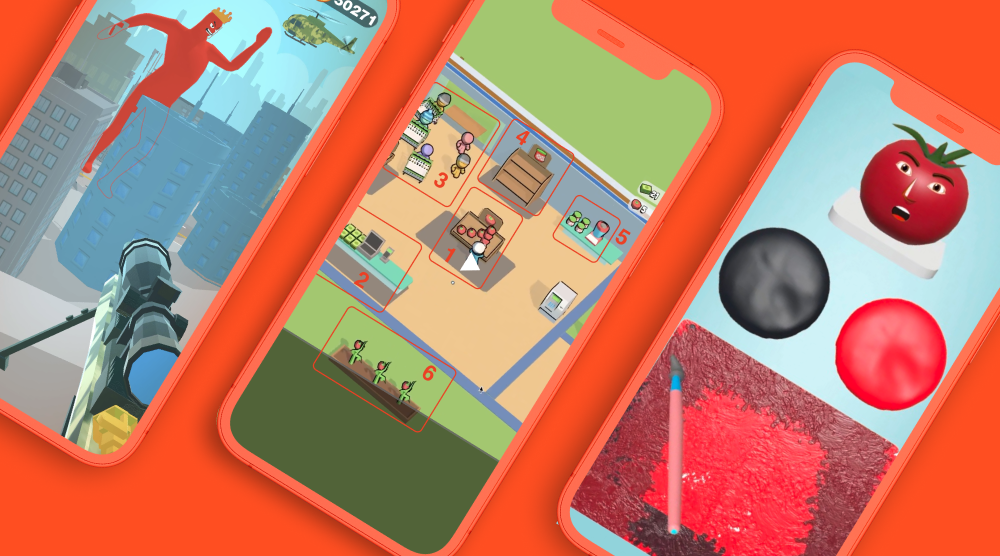 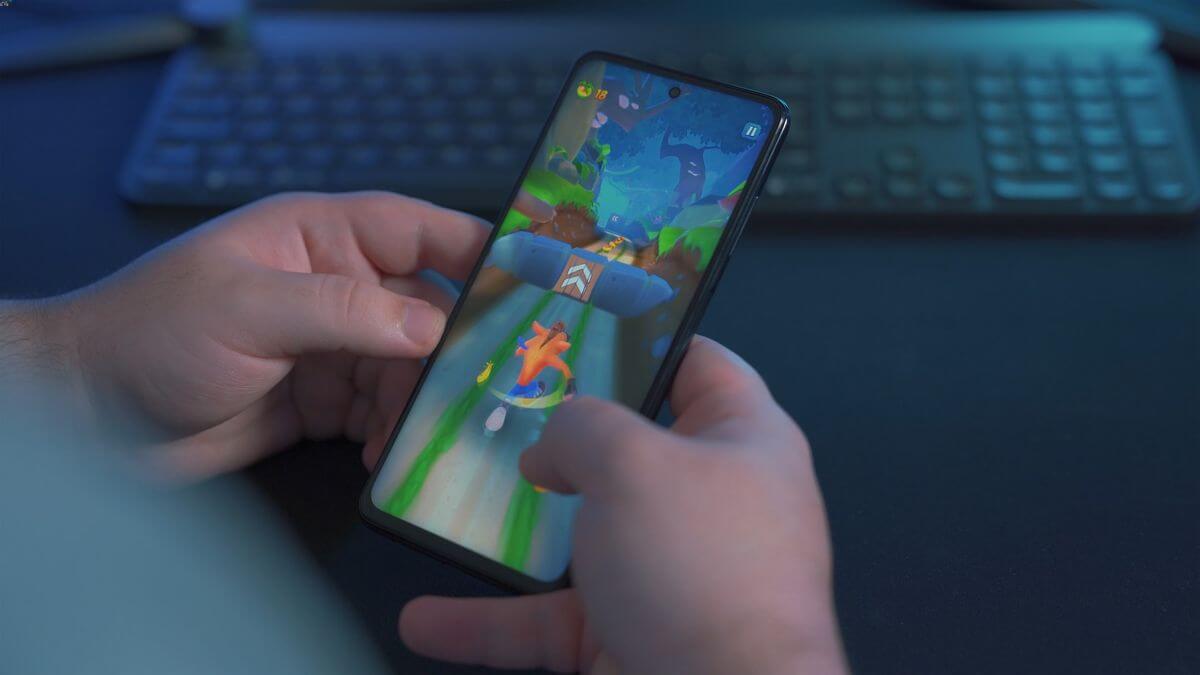