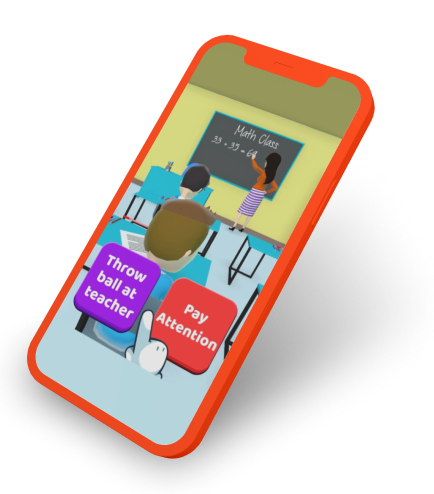 Funcell Games is one of the largest mobile game studios in the world, with hits like 9 Months, Idle Human, and Stairway to Heaven all reaching the top 5 games worldwide. Their latest title, Perfect Lie, is a hyper-casual narrative game - a genre that requires extensive resources for building out a large amount of content.

Despite the challenges of this type of game, Funcell and Supersonic grew the game to #2 on Android while generating significant profit. Here, Abhishek Malpani, Founder and CEO of Funcell Games, discusses how they partnered with Supersonic to grow Perfect Lie to the top of the charts. 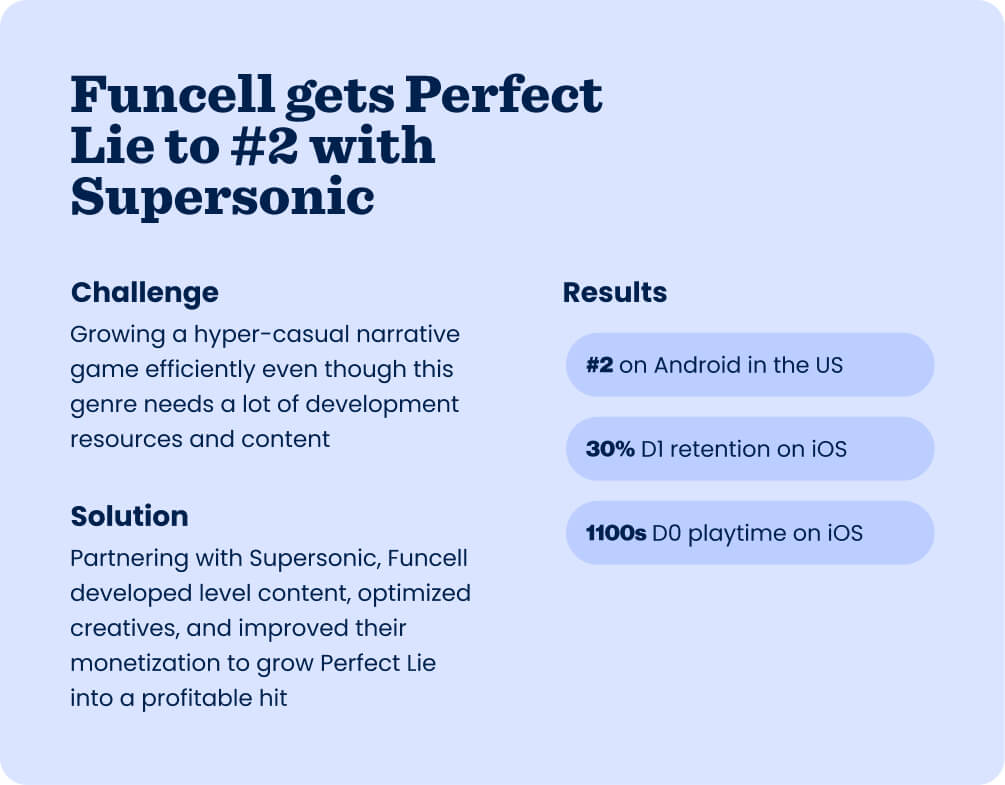 Nailing marketability with a narrative game

From our experience developing narrative simulation games, we know this genre has a huge marketability potential. Every level is different - unlike other types of hyper-casual games - so it gives us more opportunities to find the creative with the lowest CPI.

With a recent narrative hit under our belts, we were ready to test more concepts. The idea for Perfect Lie actually came from my 10 year-old nephew! He’s always suggesting new game ideas, and one time he suggested a concept based on a character who lies so he doesn’t have to go to school. I did some research and saw there weren’t any lying-based narrative games, so I brought the idea to the team in one of our all-hands brainstorming sessions.

We all agreed the idea could have potential - especially since there were so few games with similar concepts. So we built a prototype with a few levels and tested it with Supersonic. Here, we got to see how effective the Supersonic marketability test is. They ran our CPI videos across multiple channels - including ironSource, Facebook, and TikTok - so we knew with certainty whether our concept had potential. 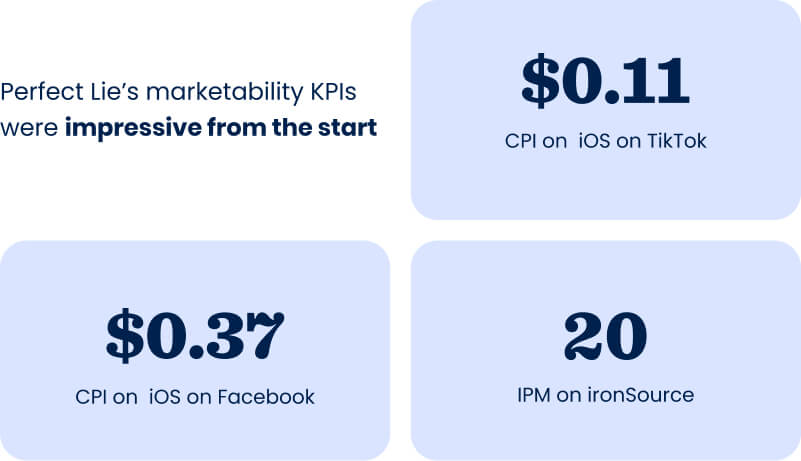 It turned out that our prediction was correct - the game had great marketability metrics from the start and performed well across audiences:

We only had a few initial levels that players were getting through quickly, so as we began building out the game with Supersonic the main focus was adding content to improve APPU (a unique metric based on retention and playtime that Supersonic uses to measure potential LTV). Hyper-casual narrative games need a huge amount of content because every level is unique and players expect a different experience as they play through each one. Features like dialogue and animation need to be thought out carefully and individually for each level.

"Hyper-casual narrative games need a huge amount of content - we moved even faster developing high-quality content thanks to the Supersonic team's suggestions and feedback."

Our team is very quick and efficient at developing high-quality content - and we moved even faster thanks to the level designer from the Supersonic team who gave us suggestions and feedback. For example, they suggested adding mini-games which helped make the levels and gameplay more engaging. They also made some UX/UI optimizations, like testing the best way to show users the different skins available for the character.

At the same time that we were building out the game, we worked with the Supersonic creative team to find a winning ad. We had experience producing creatives for our other games and Supersonic gave us a lot of freedom to build and iterate our own versions.

We then worked closely with their team to test our ideas, analyze performance, and find the best version that helped us scale affordably.

When it came to monetization, this is where having Supersonic as a partner really came in handy.

"Supersonic's expertise and knowledge in monetization helped us scale LTV very quickly, and they suggested A/B tests that led to significant boosts in ARPU."

Their expertise and knowledge in this area helped us scale LTV very quickly, and they suggested A/B tests that led to significant boosts in ARPU. For example, they suggested testing a voice-over feature, which increased D7 ARPU on Android by over 12%.

They also suggested testing unique rewarded videos that had creative calls-to-action (like “Become cool” vs. “Remain a nerd”), which led to an ARPU increase on iOS of over 8%. 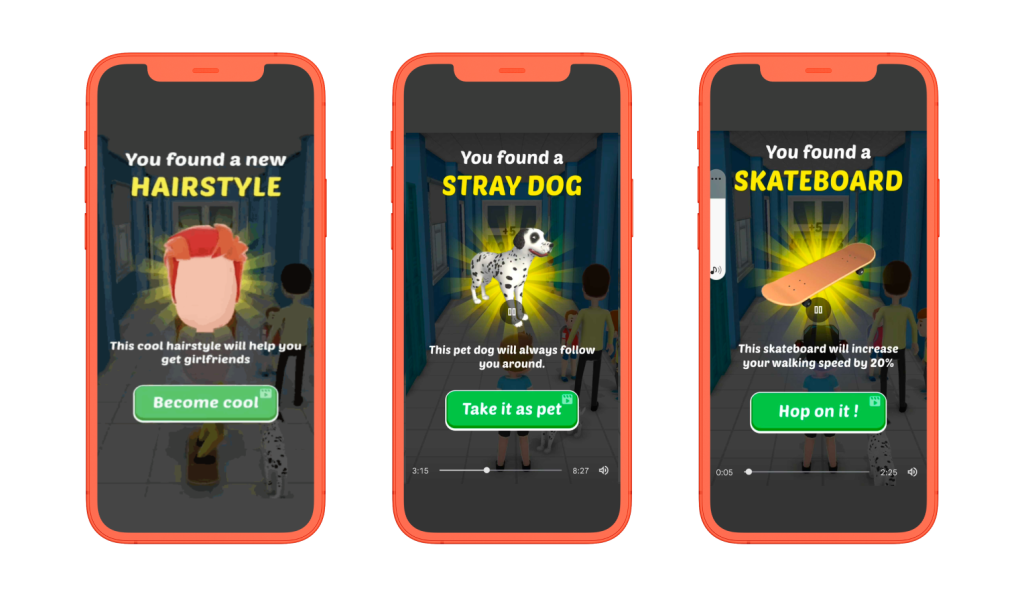 The collaboration between our team and Supersonic was effortless - we always had transparency into the test results using the LiveGames platform, and we implemented all of the winning elements efficiently. Additionally, by working closely with their monetization team, we’ve been able to take successful rewarded video placements from Perfect Lie and easily work them into the new games we’re working on with Supersonic.

With our game design, creative, and monetization optimizations, Perfect Lie was set up for a successful launch. As a result, we scaled to #2 on Android in the US and quickly became profitable.

Plus, our in-game metrics remained solid even after implementing ads:

Taking on the challenge with a partner

It’s incredibly challenging to design a narrative hyper-casual game - you need a lot of operational resources, a large team, and patience. Thankfully, we have a sizable and experienced team that’s capable of tackling the genre’s obstacles for the sake of its great marketability potential.

With Supersonic as a partner, the entire process was even more efficient, collaborative, and successful than other games we launched. They provided rapid feedback and timely answers to our questions, which we found very impressive. Also, we could feel the passion of the entire Supersonic team - everyone seems like they’re involved, wanting to help out while always remaining kind, supportive, and humble.

"Supersonic is the best publisher in the world."