How to use TikTok to inspire your hyper-casual game concept 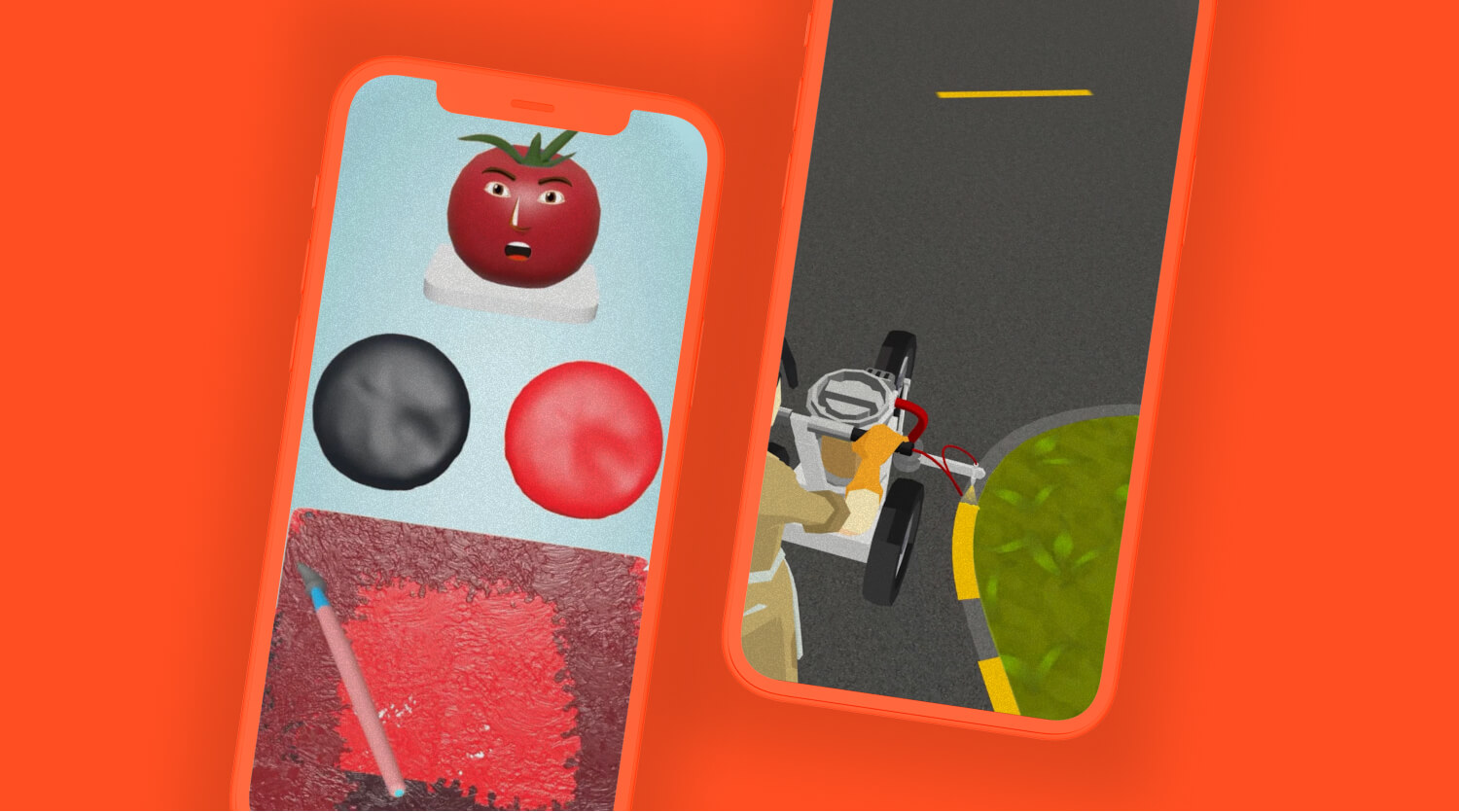 TikTok recently surpassed the 1 billion monthly active user mark, and it’s showing no signs of slowing down. As the platform continues to gain momentum, many examples of hyper-casual games that came from TikTok trends or videos have reached the top charts. From Phone Case DIY by Crazy Labs to 100 Mystery Buttons by Panteon, concepts inspired by TikTok are finding success again and again because they’ve already proven they’re popular with a wide audience and have a low CPI. Plus, they’re reaching users who are also on TikTok and recognize the trend - this familiarity makes users more likely to install these games.

To help you take advantage of this platform and come up with your own (likely marketable) concept, Uri Ron, Market Research Expert at Supersonic, shares his tips for ideating with TikTok. Below, he discusses a basic framework for taking a trend on TikTok and turning it into a hit, with two ways to apply this approach.

Identifying a TikTok trend that could be a game

There are billions of TikTok videos, but not every one is destined to turn into a hit hyper-casual game. To make it easier to sort through them, here are some key features in a video that can indicate if it’s worth designing as a prototype: 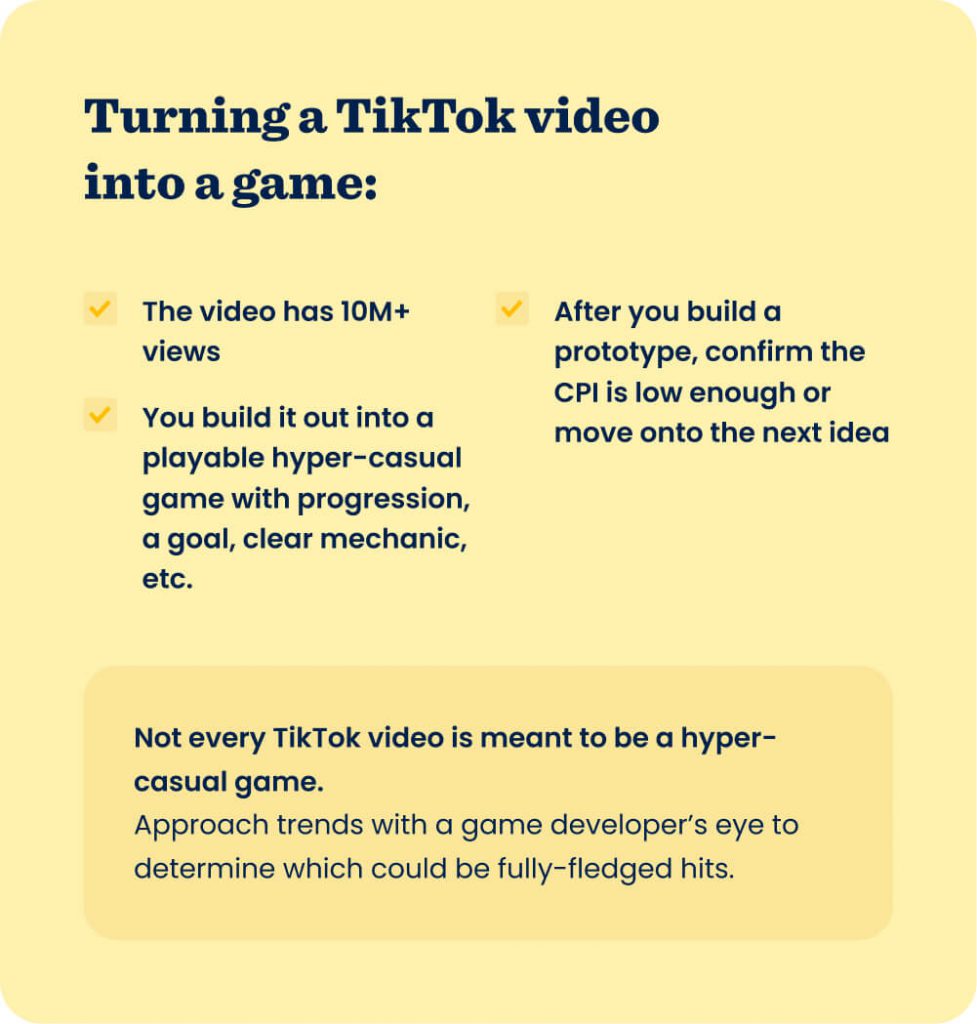 As a general rule of thumb, videos with at least 10 million views are more likely to become marketable game concepts than those with less because 10 million is the number we found that indicates a TikTok video has widespread recognition, which gives it a better chance of turning into a concept with a low CPI. For example, there was a TikTok video of the “line marking” trend that achieved over 47 million views that we then turned into the game Park Marks.

By transforming this popular trend into an engaging game, Park Marks achieved over 1.3 million installs in under two months.

Having a popular TikTok video is a start, but you also need to confirm that it could be built out as a playable prototype. Approach the video with the mindset of a game developer (you are one, so this should be easy) and ask yourself questions like:

Once you answer these questions and confirm the video could be a real and engaging hyper-casual game, it’s time to start designing your game.

Build it, test it

You won’t know if your game concept is marketable until you test it. If the CPI is high, move on to the next TikTok video and build another prototype. It’s not worth wasting too much time and resources trying to tweak your game - trends come and go quickly on the platform, and there’s already another trending TikTok video out there waiting to be turned into a hyper-casual hit.

If the CPI is high, move on to the next TikTok. There’s already another trending video out there waiting to be turned into a hyper-casual hit.

Now it’s time to put these steps into action with the following two strategies for turning a TikTok trend into a hyper-casual game: capitalizing quickly on a hot trend or turning long standing trends into timeless games.

Like the hyper-casual charts, TikTok trends change quickly. But when they’re hot, their popularity skyrockets, with videos achieving hundreds of millions of views - or more. Capitalize on this widespread notoriety by creating a game based on a current extremely popular trend on TikTok. Your game may only stay in the top charts until the trend peaks, but it’s got a good chance of reaching the top quickly, achieving massive scale, and earning significant profit before losing your place.

Browse trend discovery and take note of the hashtags and videos that seem to follow the same trends and that you could turn into a scalable game. These represent the latest videos that are accumulating views and likely to skyrocket in popularity. Squid Game, fidget toy trading, and Milk Crate challenge are all examples of TikTok trends used to inspire hyper-casual games that achieved success quickly. 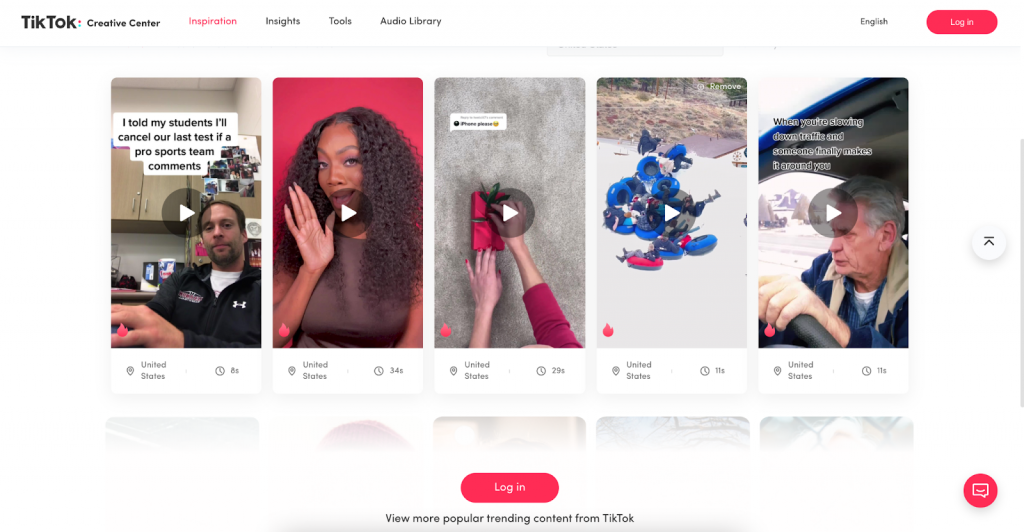 For example, Candy Challenge 3D by Idil Morgul highlights the candy cutout challenge from Squid Game that took over TikTok - the channel for the hashtag #dalgonacandy alone has over 1.6 billion views. This trend ticked the box of proving it could be a playable game, too, with features like progressing through different Squid Game challenges and clear mechanics, like shooting and tracing. As a result, the game has achieved over 24 million downloads on Android in under 3 months - 10 days into launch, it got over 6 million installs in just one day.

Speed is of the essence

The competition is likely to increase as other hyper-casual games based on the same trend start appearing. The key is to get to market as quickly and early on in the trend as possible so your game reaches users before your competitors. Focus on designing and testing a basic prototype quickly that clearly captures the trend and follows other, basic best practices for hyper-casual games - like improving the clarity of gameplay and building engaging creatives. Also try out these tips for being a leaner, faster game developer:

There are TikTok trends that come from objects and activities in daily life, which you can find by browsing hashtags and videos that have remained popular over months, if not years. A few hashtags we recommend starting with include:

Though they’re older, creating a game based on one of these more timeless trends can still generate high marketability with consistent scale. The tie dye trend is an excellent example of this: tie dye kits have been available in stores for many years, but the tie dye trend on TikTok is a more recent phenomenon. The game Tie Dye from Crazy Labs took inspiration from trending videos, like the one with over 22 million views below, to design a game that achieved over 94 million installs and continues to achieve over 500K downloads on average each day over a year since its launch.

@flamingoparadye These colors are so bright! I can’t with till you all see what I’m going to do with these tops! #tiedye #mywayorthehighway #diy #fyp #gypsydyes ♬ Airplane Mode - Limbo

For games based on a longer-standing trend, execution and depth of gameplay matter more than those inspired by a quick-hitting viral video. You’re not relying solely on the popularity of the trend - the gameplay itself needs to stand on its own as engaging.

Take more time to develop these concepts into a game so you can focus on great execution and improve gameplay. The TikTok trend your game emulates is likely to remain relevant for months at a time - users will recognize the concept as familiar and be encouraged to install for a longer period of time than the hottest trends that stay at the top only for days.

Color Match by Supersonic highlights the color matching trend on TikTok, but the concept for the game traces back much further. It began with the desire to create a game with a color merge mechanic after publishing another title - Colour Merge 3D - with a similar mechanic. After seeing a trending post on Reddit of a man color matching paint on a canvas to the sky, the idea grew even further. Then the color matching trend on TikTok emerged, with videos like the one below achieving over 18 million views, which confirmed the entire concept was probably marketable.

@chrisbreier I think I matched the color of everything in my fridge!😂 #pickles #green #painter #colormatch #artistsoftiktok #color ♬ original sound - chrisbreier

Turning it into a game was pretty straightforward:

The game has since achieved over 5.5 million installs on Android and maintains over 1.5 million daily installs.

TikTok your way to the top

The ability to spot social trends and turn them into hyper-casual games is a key skill for developers looking to succeed in this market. Trends are already popular among a large audience, so they’re good indicators that a game would likely have high marketability, too. Looking to TikTok for inspiration also helps with what’s often the most challenging part of development: ideation.

There are new hyper-casual games inspired by TikTok rising to the top of the charts every month - is yours next?