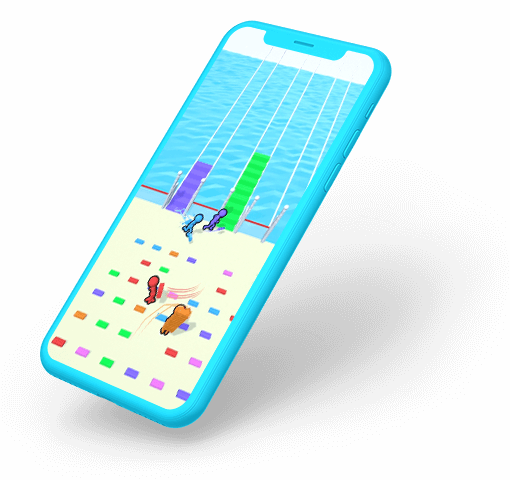 Case Study
Bridge Race reaches #1 on both app stores with Supersonic after failing to launch with another publisher
Garawell Games, Bridge Race

Garawell Games is a 7-person app development studio based in Istanbul. Bridge Race is the first game they’ve launched with a publisher, and it’s skyrocketed to the top of the charts - it reached #1 on iOS and Android in several countries including the U.S. Nebih Başaran, CEO and Founder at Garawell, discusses his experience partnering with Supersonic after failing to launch his game with another publisher and what it was like to get published, reach the top of the charts, and win the Silver Medal (and big cash prize) in the Supersonic Superstars competition.

From founding a startup to running a hyper-casual studio

After I graduated university with a computer engineering degree, my career began as a business analyst at Coca-Cola in Istanbul. While there, I networked with other entrepreneurs and then left Coca-Cola to found a startup company in the travel and board game industries.

During university, I was interested in developing games and I’ve always loved playing computer games. I missed game development, so in 2019 I followed my passion and founded Garawell Games. From the start, I decided to focus on building hyper-casual games because I saw the potential to reach millions of users in an exciting, always-changing market if I had a unique idea and fast execution.

The early days of Bridge Race

The idea for Bridge Race traces back to a different game we kicked off with another publisher. In its earliest iteration, the game used a collecting and filling mechanic combined with a last man standing concept. We designed a mini-golf environment with no characters, and users collected and placed golf balls into holes to create bridges.

Then we created another iteration with non-player characters (NPCs) and ragdolls, but we couldn’t get retention above the publisher’s threshold of 40-42% no matter how many times we tested. After months of trying new versions and game tweaks, we stopped working on the game and thought we would never launch it.

Finding a partner who believed in us

After failing to launch any game with our previous publisher, we started researching other mobile game publishers - that’s when we came across Supersonic. We showed them our portfolio of the 50-60 games we had built but never launched, and they immediately saw our potential. Supersonic’s eagerness to work together and encouraging response clearly showed they trusted us to develop a hit game together.

"I’ve always believed it’s best to work with a single publisher so that we can focus all of our energy and resources into that partnership. With Supersonic, I recognized we had the same goal so it was an easy choice to pick them as our only publishing partner."

I’ve always believed it’s best to work with a single publisher so that we can focus all of our energy and resources into that partnership to achieve success. With Supersonic, I recognized we had the same goal - to build a hit game - so it was an easy choice to pick them as our only publishing partner. Now that we had a trustworthy and transparent partner on our side, we could put all of our combined resources and time behind launching a successful game.

Getting Bridge Race into shape

Once we started working with Supersonic, we began re-testing all of our old games to determine which had marketability potential based on CPI. That’s when the early version of Bridge Race - the old mini-golf concept - came back into the picture, as its CPI during testing was low enough to get the attention of the Supersonic team.

Next, we iterated off of our original idea by using a stacking mechanic, which was clearly trending in other hit games like Roof Rails and Shortcut Run. This unlocked great in-game metrics like retention and playtime, but CPI was high. So we continued to tweak the game and iterate on our creatives together with Supersonic to reduce CPI while maintaining retention and playtime.

By the beginning of 2021, the new versions of our game started yielding positive results and lowering CPI. For example, the second version Bridge Race had a CPI of $0.38 and the 3rd version we tested had a CPI of $0.36. These results showed we were moving in the right direction, but it wasn’t until we designed a great creative that we reduced CPI significantly to $0.22, a decrease of 47% from the first test we ran where CPI was $0.41. Supersonic helped polish and refine the creative further and added sound effects, which helped the in-game metrics: D1 retention reached 45% and D0 playtime was 730s. With these incredible results, we went from soft launch to global launch in one day.

Unlocking CPI helped us scale affordably so that in the first month of global launch, we were already very profitable. Bridge Race reached #1 on iOS and Google play in the US - it’s stayed in the top 10 for over a month since launch, too. We also won the Silver Medal of the Supersonic Superstars contest and an immediate cash bonus, which was the cherry on top of a very successful and efficient publishing process.

As a small studio, having the entire Supersonic team on our side improved our efficiency to launch Bridge Race and helped us resolve issues faster. We had support from all of Supersonic’s teams - monetization, design, publishing managers - whenever we needed them, which made us feel like a part of the company.

"Supersonic is the most vibrant and exciting publisher in the market at the moment - they proved that in their full commitment and transparency."

We always knew we’d succeed, and with Supersonic we are continuing to build on our great results with updates to Bridge Race and testing new games. Supersonic is the most vibrant and exciting publisher in the market at the moment - they proved that in their full commitment and transparency, which helped us build a hit game and get to the top of the charts quickly.

Case Study911 reaches #1 across all categories on iOS and remains a top 10 game for over a monthFive Bits, 911 Emergency Dispatcher