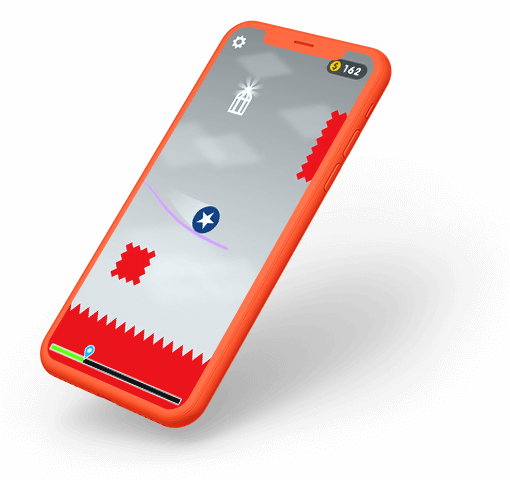 Case Study
Draw the Line decreases CPI from $0.80 to $0.21 and reaches top 5 with Supersonic
Friends Games Incubator, Draw the Line

The concept for Draw the Line came out of the talented pool of developers at Friends Games Incubator, a development company based in Ukraine that’s part game studio and part incubator. After testing with Supersonic and working together to reduce CPI and design a scalable, profitable game, Draw the Line reached top 5 on iOS in the US and top 10 on Android for free apps overall worldwide.

Hear from Vladimir Delinsky, the founder of Friends Games Incubator, about his experience partnering with Supersonic to achieve a top place in the charts, reduce CPI from $0.80 to $0.20, and earn a significant profit along the way.

On iOS in the US

Going solo in the world of mobile game development

I began my career in web development, but always felt the pull to get into game design. I started by designing tabletop board games, and even won a prize for “best tabletop game” at a contest in Saint-Petersburg in 2014. I then began designing mobile games and together with a couple of partners founded a development studio focused on casual games - quickly we grew the studio to be over 30 people.

While my first studio venture was a success, I wanted to take on a new project and exercise my creativity independently - I went solo and established the Friends Games Incubator in 2018.

Turning many ideas into hyper-casual prototypes

At Friends Games Incubator, we initially focused on mid-core and casual game development. We have a very creative team - from the marketing department to our game designers - that brainstormed new ideas for games every week, and we wanted to start developing these concepts into games. Mid-core and casual games took a while to design, which is where we saw the appeal of hyper-casual development - these games are faster to develop, so we can quickly turn an idea into a prototype and begin testing.

Creating a mobile game from a Flash concept

The concept for Draw the Line came from an old Flash game we created back in the day. For all of you who are too young to remember, Flash is a programming language popularized in the 90s as the basis of many free, online desktop games.

We saw how addicting the gameplay of the desktop game was and decided to turn it into a mobile game. After showing the prototype to a few publishers, Supersonic’s team showed they truly believed in our concept. They suggested we try creating different versions using the same mechanic - we created a 3D version in portrait orientation and began testing it with Supersonic.

The initial testing period took place during the peak holiday season (mid-December) and yielded a CPI over $0.80 - it seemed like we were going to have to kill the project. However, Supersonic noticed the CPM was also very high, which indicated there was a lot of competition from other games and could account for our unnaturally high CPI. Our team and Supersonic’s were both pushing to keep going on this project because in-game metrics were promising (D1 retention was 51%, D7 retention was 13%, playtime was 700s).

Testing again after the holidays and reducing CPI 400%

Despite the game’s high CPI, we pushed to keep testing the game and the Supersonic team agreed we should try again after the holidays when competition decreases. Together with Supersonic, we designed a new creative set that showcased the satisfying mechanic and high-skill gameplay. We also tried out a few iterations that used bright and bold colors, and others that leveraged industry trends.

Immediately, these creatives achieved positive results, with CPI decreasing to $0.38. Then the Facebook algorithm adjusted, helping reduce CPI even further to $0.21 - a 400% decrease from where we started during the holidays at $0.80. We saw the importance of letting social networks improve performance on their own over time if initial CPI is good.

We continued to design and test over 200 creatives with Supersonic, introduced meta/skins, and A/B tested monetization strategies. All of these changes helped maintain our in-game metrics while improving profitability - after integrating ads, Draw the Line still had a 46% D1 retention rate, 12.6% D7 retention, and 910s playtime.

Achieving a low CPI enabled us to scale profitably and reach the top 5 on iOS and top 10 on Android in the US. We even earned a spot in the top 10 free apps overall globally on Android.

Working with a publisher that believed in us

Supersonic believed in Draw the Line as much as we did, which encouraged us to keep testing and iterating so we could overcome the challenge of our initially high CPI. Any other publisher would probably drop a game with an $0.80 CPI, but Supersonic saw its potential and helped us improve performance and test again. That speaks to what working with Supersonic is like and what they believe in. Throughout the publishing process, their team was flexible, patient, and helpful - whenever we mentioned issues or problems we were facing, they would offer assistance and solutions.

We’re still working on optimizing Draw the Line with Supersonic - and it’s not the end of our journey together. We look forward to growing and publishing future titles with their team.