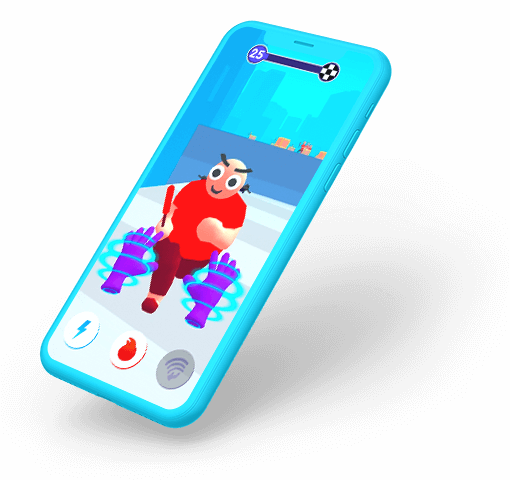 FeoFun is a game development studio and publisher founded in 2018 and based in Cyprus and Russia. Elemental Master is the latest hyper-casual title from FeoFun - together with Supersonic, the team grew it into a profitable hit game.

Hear from Andrey Surov, Executive Producer at FeoFun, and Aleksandr Belov, Lead Game Designer for Hyper-Casual at FeoFun, about their experience partnering with Supersonic to grow their game to the top 10 on iOS and Android and win the $200K minimum guarantee in the second Supersonic Superstars competition after failing to launch with another publisher.

On Android and iOS in the US

Inspiration from the top charts

Looking at the top hyper-casual games in the second half of 2020, our team at FeoFun saw that first-person games were trending. That, plus being inspired by other popular games that used supernatural forces and elements, led us to design a prototype of a first-person perspective game involving superpowers.

Initially, we tested versions showing off different powers (e.g. telekinesis, fire, lightning) and ran CPI tests of each iteration with another publisher. They performed well in terms of CPI, so we moved on to the next stage of publishing and began focusing on retention. We found that combining all superpowers into one version and letting players switch between them during gameplay boosted in-game metrics like retention and playtime. However, our CPI wasn’t meeting the publisher’s benchmarks - so we scrapped the idea and moved on to other projects. Then we found out about the Supersonic Superstars competition.

Giving the game a second chance

We submitted Elemental Master to the competition in its latest version - the iteration with all of the superpowers. The initial metrics from the marketability test were promising for an MVP:

Supersonic reached out to discuss next steps - we got on a call with a publishing manager to talk about our process of iterating the game and what could be improved and optimized. We then sent the Supersonic team a history of the game’s versions and what we changed in each new build. From here, we started working together and communicating constantly over Slack and phone calls.

Looking to the past to inform the present

The Supersonic team looked back into the game’s version history to pinpoint successful elements from previous builds and aspects that failed but we could learn from - and we then applied these learnings to the next iteration.

We decided to revert to an earlier version of the game then began iterating on it, starting with simplifying the game design - the Supersonic team suggested changes like removing the boss level and A/B testing shorter levels.

Diving into the game’s history, the Supersonic team identified the top 6 creatives we tested from previous versions that we used for UA campaigns. These creatives along with our game design changes helped unlock impressive KPIs, like:

Having achieved these great metrics, we moved onto soft launch.

During soft launch, together with the Supersonic team we began A/B testing monetization strategies and new game elements. These included:

Our game’s low CPI together with these tweaks helped Elemental Master climb the charts - it reached top 10 on Android in 60 countries and earned significant profit along the way. Such great results led to us to win the Supersonic Superstars competition, including the $200K immediate cash prize and ongoing financial support.

Immediate feedback and transparency along the way

With every change and A/B test made along the way, we were able to track the impact on the Supersonic LiveGames dashboard - even after the game was live. We really enjoyed this transparency and being able to track game performance at every stage of publishing.

"Supersonic saw the potential in our game even after our game failed with another publisher. They helped direct us on the right path to reach the incredible results we see today."

Working with the Supersonic team was great - they gave us instant answers to all of our questions any day, at all times. They also provided feedback very quickly so we could make necessary changes and get to launch more efficiently.

Bottom line, Supersonic saw the potential in our game even after our game failed with another publisher. They recognized the opportunities for success in earlier builds and helped direct us on the right path to reach the incredible results we see today. We’re looking forward to publishing more games with Supersonic in the near future.