Born2Play is a hyper-casual development studio based in Shanghai, founded by Stan Mettra in 2018. Check out his story about getting into hyper-casual development and partnering with his friend and programmer, Denis Hiezely, to launch Stacky Dash. With Supersonic, Born2Play scaled the game’s user base to reach the top 5 on iOS in 28 countries and reduce CPI 37%. Here’s their story.

From console games to mobile hyper-casual

Since the 90s, I worked at Ubisoft in traditional console gaming before moving to mobile, first in Paris then in Shanghai. In 2017, I left Ubisoft to try solo mobile game development and recognized that hyper-casual games were a good way to enter the market, explore multiple concepts, and make a profit.

Then I met Denis, who coded as a hobby on the side of his day job as a school librarian. He had nearly 10 years of self-taught coding experience and was a passionate programmer who could complement my design skills which would enable us to work quickly to produce more games - Stacky Dash is our latest.

The inspiration for Stacky Dash goes back to one of the best-performing games I designed before meeting Denis - it was called Gobble Dash. Like Stacky Dash, this was a swipe-based game about a snake in a maze eating dots to make it grow. We recognized that it was addictive, engaging, and had excellent retention. That same idea of collecting and growing helped inspire our concept for Stacky Dash. This ‘growing’ mechanic is inherently satisfying, so we combined it with the appeal of a hyper-casual puzzle game and the popular stacking mechanic.

Recognizing our potential after failing to launch with another publisher

We designed a prototype of Stacky Dash and saw it had promising metrics - super low CPI, 32% D1 retention and 900s playtime - and reached the soft launch stage with another publisher. With them, we tried many different solutions to try and improve our KPIs, but we didn’t have much visibility into the marketability tests. Despite our sustained efforts, the CPI kept rising quickly and we couldn’t lower it - the future of Stacky Dash looked grim. That’s when we started looking for another publisher.

Supersonic had reached out to us in the past with an email and an introductory meeting that felt genuine and honest. Instead of quickly talking about the millions of dollars that a successful project could bring us, Supersonic focused on giving us more details about their UA methods and other reasons to partner with them besides a big payout.

"Supersonic focused on giving us more details about their UA methods and other reasons to partner with them besides a big payout. "

We followed up with them to submit our Stacky Dash prototype and their team quickly recognized the potential of the game, despite the high CPI. Supersonic’s growth and monetization teams shared their findings with us, and they agreed that the game could be published if we made game tweaks and followed their recommendations to bring down CPI and improve in-game metrics.

Transparency at every step of the publishing process

Together with Supersonic, we worked through each part of the publishing process methodically, starting with making game tweaks to improve retention and reduce CPI. We measured the prototype’s retention to determine our benchmarks and improved performance with the following game tweaks, as suggested by Supersonic:

With these game changes in place, we next focused on the marketability test to continue addressing the CPI. We were very impressed with Supersonic’s in-depth approach to marketing and testing. Their user acquisition and marketing expertise shone through at this stage in particular, and their transparency with us the entire way through let us see this for ourselves.

Supersonic tested many channels for marketability beyond the usual social and mobile ad networks. They also tested about 200 videos and 20 interactive end cards and playables that focused on changing color and saturation, which reduced CPI from $0.40 to $0.25 on Facebook. Their many creative iterations and optimizations also helped keep CPI stable once we brought it down despite the increase in scale.

Supersonic shared the results of their multi-channel approach, which helped us get a holistic view of our CPI and see that our game was a good product-market fit. They also showed us how they ran marketing campaigns and marketability tests and shared their findings in a clear and digestible way.

After the game design changes and marketability tests that lowered CPI to $0.25, we also saw retention increase to 39%, and playtime stabilize at 900s. Even though retention was still on the low end of Supersonic’s benchmarks, they agreed we should skip ahead to the monetization stage while making further improvements to the game.

At the monetization stage, we implemented the recommendations from the Supersonic team, which included adding a skins shop, metas, end level popups with rewarded video, and a bonus stage, all of which helped boost rewarded video engagement by 23%. We also tried out new color variations, speeds (of collecting tiles), and number of platforms (we went from 4 platforms to 3 per level), which increased engagement and created more opportunities to show more interstitials to ultimately boost ARPU. 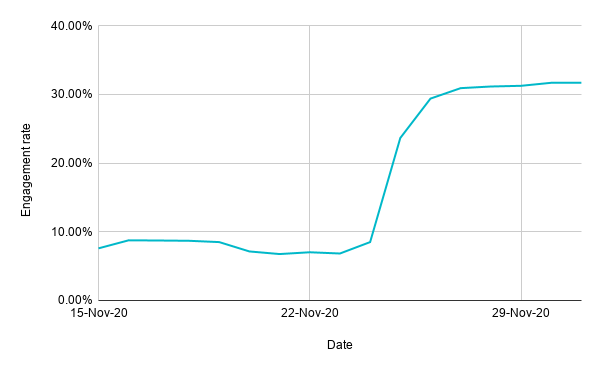 One of the things we enjoyed most about working with Supersonic was the amount of data they gave us access to - we could see our LTV, engagement rate with ads, number of installs, and all of the other important metrics for publishing in the Supersonic dashboard. We also had visibility into how the creatives and user acquisition campaigns on each channel were performing, which gave us a clear understanding of what was working best.

Supersonic’s expertise with UA and marketing, along with their game design recommendations, helped Stacky Dash climb the charts and reach the top 5 games on iOS in 28 countries. Their creative optimization drove over a hundred thousands installs each day with a very competitive CPI, while building a high LTV that translated into significant profit. With Supersonic’s help, our game was profitable from the first day of launch - now, more than a month later, we continue to hit our KPIs.

"One of the things we enjoyed most was the amount of data Supersonic gave us access to and the visibility into how the creatives and user acquisition campaigns on each channel were performing, which gave us a clear understanding of what was working best."

On top of that, we felt we had a partner in Supersonic that was transparent, collaborative, and knowledgeable. They saw the potential in Stacky Dash and with their insights, recommendations, and assistance, we succeeded in lowering CPI, generating significant profit, and getting to the top of the charts quickly and efficiently.

on iOS in 28 countries