How to improve the LTV of your hyper-casual game 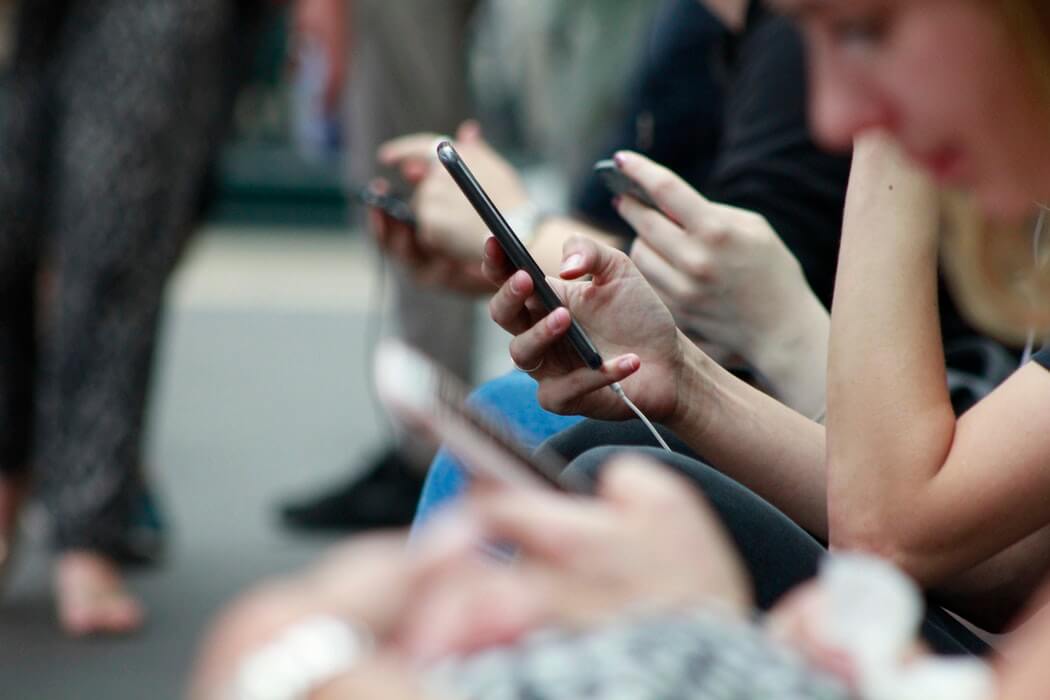 On average, hyper-casual games in the US have an LTV of $0.60 - $1.50 - the more popular games on this scale achieved a higher LTV by optimizing their monetization strategy and improving retention. The higher your LTV, the more you can spend on user acquisition while maintaining high margins and the faster you can scale. For hyper-casual games in particular, increasing LTV is the ultimate challenge because these games are usually so short-lived, so the question becomes how to boost LTV efficiently. We talked with Samantha Benjamin, Growth Lead at Supersonic, about the tips she gives the developers we work with to help them do just that.

In hyper-casual, ARPU is often interchangeable with LTV because the LTV is often so short - just 30-60 days, meaning the ARPU at D30-60 will usually be equal to LTV, too. In other words, boosting profit is tied directly to improving your LTV. If we take LTV and ARPU to be the same and we know the highest retention period in hyper-casual is during the first 7 days - only 12% to 13% of users usually remain after 7 days - this is the time frame we should follow for boosting our LTV. To maximize profit within this duration and extend the window further, retention matters.

Improving retention keeps more users in the game for longer, giving you more opportunities to monetize them, which ultimately boosts your LTV. To improve retention, you can start by looking at which levels are leading to a drop-off in users. By identifying this as a problem area and why, you can then either remove or change the level. You can also add unique content to your game - like new designs and features - that can go a long way in improving playtime, which is another factor that impacts LTV.

Emoji Puzzle worked with Supersonic to make game changes that helped get their app to #2 on Android in less than 6 weeks. Building out more levels, introducing mini-games, and simplifying game mechanics all contributed to them achieving a D1 retention of 47% as people could play the game for longer. With more users playing for longer, this also generated a high LTV of $0.60.

Since interstitials play such a big part in a hyper-casual game’s monetization, A/B testing an interstitial strategy is one of the best ways to find the ‘sweet spot’ of showing the right number of interstitials at the right time to boost ARPDAU and LTV without greatly affecting retention. There are a few ways to test your interstitials, including by timing, level, and level-end.

Testing the times you choose to serve an interstitial helps determine when users are most likely to engage, which can maximize the overall impressions per user. Since every game has a different level length, the timer is a good feature to A/B test with different durations. For example, some games can have a better LTV with a 15-second timer, while others will perform better with a 45-second timer. There isn’t one rule of thumb here that proves the best time to show interstitials across all games - that’s why it’s important to test this and look for the ideal setup for your game.

Testing which levels to show an interstitial can also yield different engagement rates. You should consider how long an average user plays your game for this test because the more that users play, the deeper into it you can show interstitials and the more revenue you can earn.

Bazooka Boy is a good example of a game with longer retention. Since users often played long enough to reach a deeper level, we showed interstitials at a deeper level in the game. Since users that were deeper into the game were more engaged, this meant we could show the interstitial at level 8 instead of level 3. Showing interstitials earlier on was negatively impact retention, so showing them later helped increase playtime to 1200s and boost LTV to over $1 (compare that to the hyper-casual average of $0.60 - $1.00 we mentioned earlier).

Usually, interstitials are placed after a level ends, like we talked about with the timing test. But more often, hyper-casual games show these ads before the end-level page, which is the page a user reaches when they complete a level - it summarizes their performance, gives them a reward, etc. The level-end interstitial test involves placing the ad before (if the user didn’t watch any ads for X seconds) vs. after the end-level page (if the user didn’t watch a rewarded video or other ads for X seconds) and comparing performance.

The four types of rewarded video placements we’ll run through and that are the most common for testing are: economy-related, progression value, try your luck, and unlock special content.

Rewarded videos that are directly related to the game economy (e.g. earning currency) fall into this category. A common example of this type of reward includes watching a video to triple winnings or get additional currency. For games with an in-app economy that centers around a primary currency, this rewarded video placement at the end of a level can be very effective at boosting engagement. 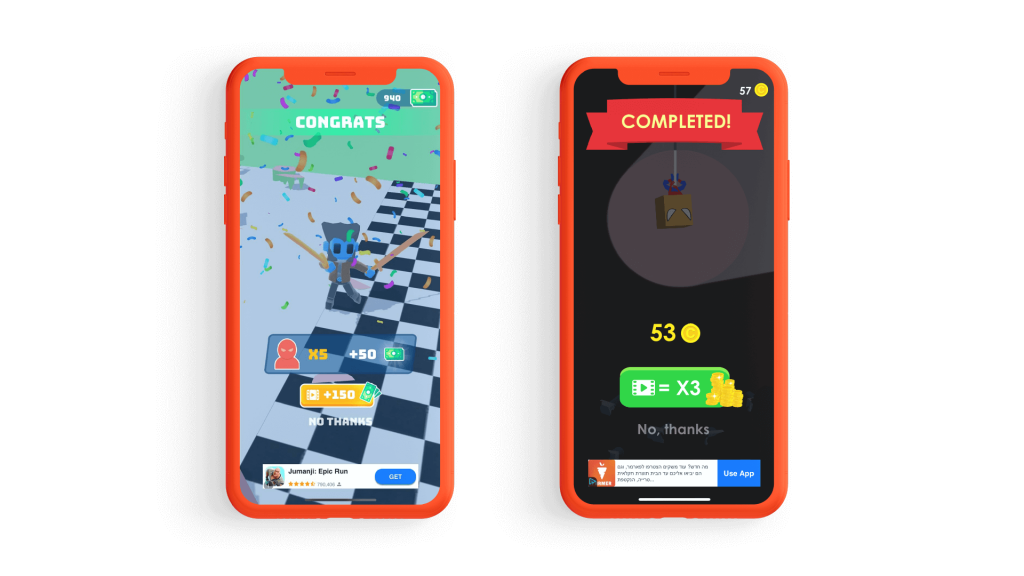 The progression value placement moves users through the game by rewarding them with features that directly impact gameplay, encouraging them to keep playing and helping them reach deeper levels. Progression value rewarded videos are directly connected to gameplay, like letting a user watch a video and skip a level. For example, in Wheel Scale, users can watch a video and advance 20% to getting a new wheel. They can keep watching rewarded videos to fill the progress bar 100% and get the wheel, which has different benefits and gives them an advantage in the game. 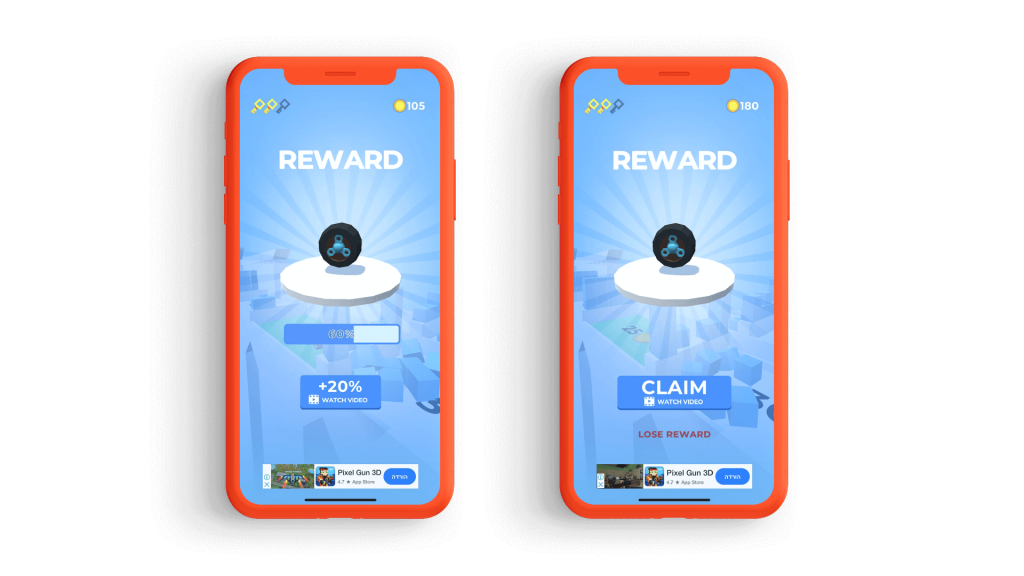 The try your luck placement is a casino-style or surprise gift rewarded video that involves chance. Common rewarded videos that fall into this category include having users watch a video to spin a wheel, pick a prize, or pick from chest rewards. Adding an element of luck into the rewarded video is a way to engage users and can fit directly into gameplay, as seen below with Join Clash. 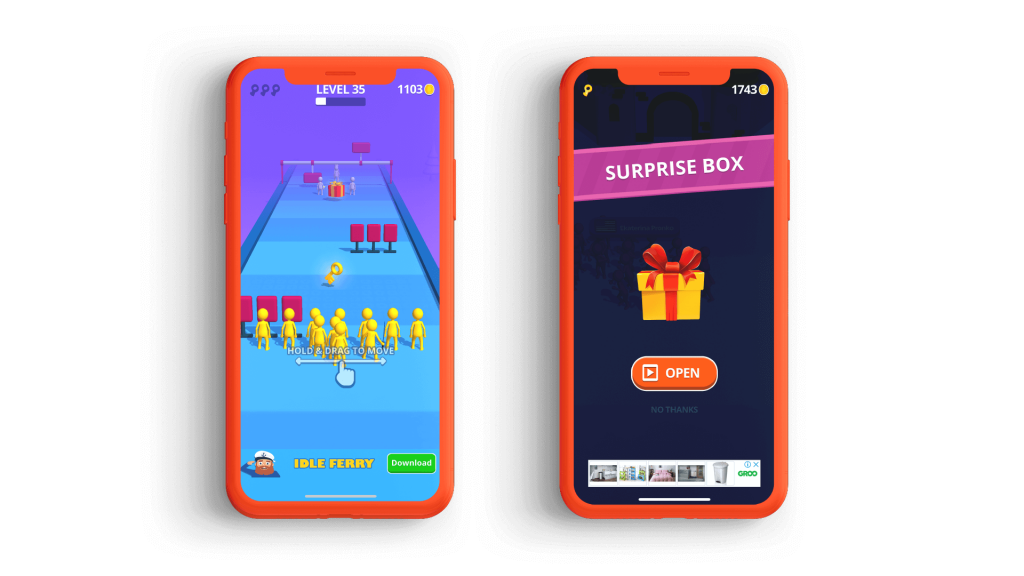 Letting users unlock special content through a rewarded video can offer them a major boost at a crucial time - like unlocking extra equipment on a boss level - or keep them engaged with additional features, like a bonus level. Another option for this type of placement is letting users watch a video to skip or refresh missions. Unlocking special content with rewarded video can be a major prize, so placing this type at a deeper level or making users watch a few rewarded videos to earn the prize can help increase engagement rates. 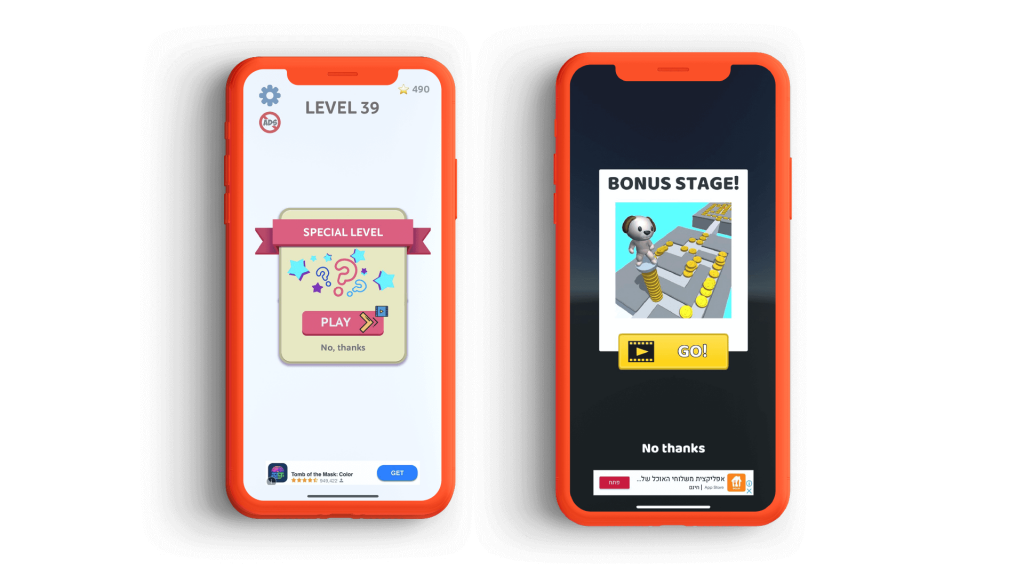 Even though it’s expected for hyper-casual games to have short LTV curves, there’s no reason you can’t increase the value of your users and maximize ARPU quickly - and even extend the curve. With these tips on boosting retention and optimizing your interstitials and rewarded video, you can keep users engaged and monetize them more effectively to increase LTV. 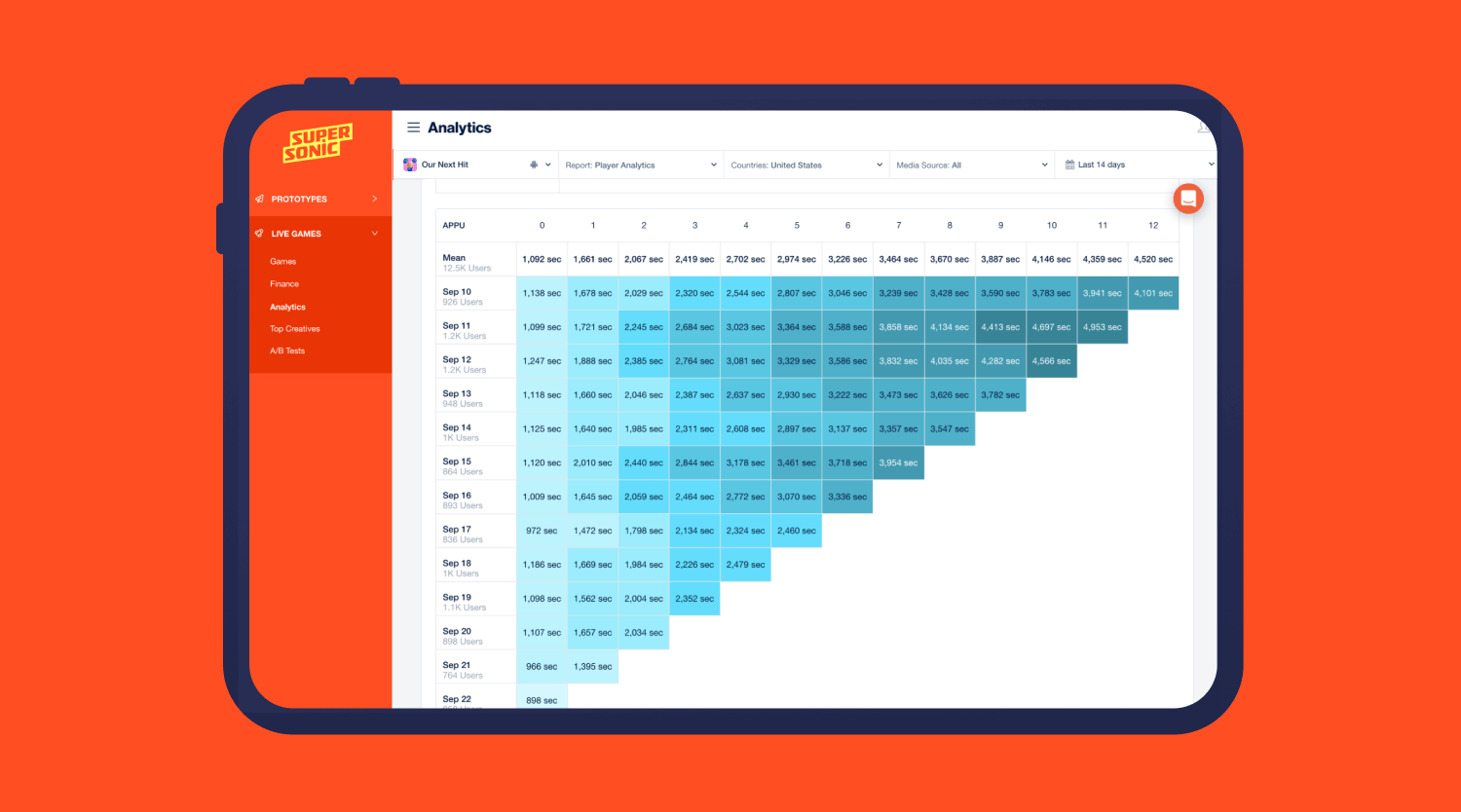 Case StudyHow Bazooka Boy made it to the top 10 in both app storesLightneer, Bazooka Boy