Going Balls reaches #1 on Android and scales profitably with Supersonic 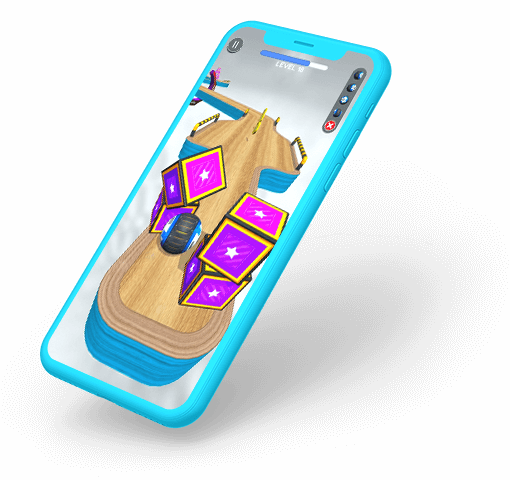 Pronetis Games is a game development studio based in Romania with hit titles like Gyrosphere Trials and Overtake. Going Balls is their second and biggest hyper-casual hit - with the help of the Supersonic team, it’s already achieved over 50 million installs worldwide, reached the #1 spot on Android and top 10 on iOS in the US, and generated significant profit. Hear from Ionut Iftimia and Stefan Filote, the co-founders of Pronetis, about their experience partnering with Supersonic to grow their game and beat the odds after experiencing a high CPI.

From mid-core to hyper-casual

Before we were game developers, we were mobile web developers for a popular TV company - 10 years ago we started developing mid-core games. As we were developing and launching these games, we saw the rise of the hyper-casual genre and how much faster they were to develop, test, and publish. Compared to mid-core games which take around 6 months to test and build, hyper-casual games can go from testing to the top charts in just a month or two. Also, we saw that the market was evolving and hyper-casual games were becoming more popular, so we decided to pivot to keep up with the shifting industry trends.

The first hyper-casual game we launched with another publisher was Overtake, and from there we started building out more concepts. At the same time, we started looking for a new publishing partner that could offer expertise, experience, and financing. We heard about Supersonic through one of our friends in the industry who recommended them - we also saw they published many of the hits in the top charts. From our first conversation with the Supersonic team, we clicked - and their clearly transparent approach really appealed to us. We partnered up and began testing our prototype for Going Balls.

The idea for Going Balls came from one of our previous mid-core games, Gyrosphere Trials. This game achieved over 20M downloads on iOS and Android, so we knew it was a concept that was marketable. The core mechanics from Gyrosphere Trials inspired the ones we used for Going Balls, but we adapted the implementation, psychology, and gameplay for a hyper-casual audience.

After testing our prototype, we achieved the following metrics:

As you can see, our CPI was pretty high - we worked with Supersonic to iterate and design new builds with the aim of lowering CPI. Together with the Supersonic team, we iterated on:

Many of these variations helped Going Balls feel more like a hyper-casual game and made it more accessible, like making the levels easier. And even though CPI remained high, in-game metrics like retention and playtime remained stable and proved the game had potential. Playtime, for example, remained the same and even increased after D1, while with most hyper-casual games it decreases.

A/B testing with Supersonic to lower CPI and maximize ARPU

Throughout the testing phase, we felt the Supersonic team was putting their full energy and commitment behind our game to help us reach their benchmarks. With all of our iterations and the game’s promising in-game metrics, we decided to move onto soft launch.

We began A/B testing our game’s design and monetization to improve KPIs and boost revenue, using Supersonic’s AB test tool, and the Supersonic team helped us decide which features were best to test and how we should do so. For example, we A/B tested the timing of interstitial ads, which helped maximize ARPU and allow more flexibility with the CPI. With our strong retention and playtime, we optimized our monetization strategy to transform retained users into profit, which yielded a very strong D5 ARPU.

We also added a super bonus level and challenge level suggested by the Supersonic team. Users could access the super bonus level by watching a rewarded video, while the challenge level - which wasn’t gated with an ad - served to entice the more hardcore, “pro” users that wanted a more difficult experience. Both levels helped increase ARPU and retention, complementing our efforts with ad placements and timing on the monetization side.

Throughout soft launch, we really enjoyed the transparency and access to metrics available directly through the Supersonic LiveGames Platform. We always knew how our game was performing and the impact of our tests.

Patience pays off: Getting to the top spot on Android in the US

From testing through soft launch, we never felt rushed to get to global launch or delayed waiting for feedback from Supersonic - the pacing was perfect. We felt the entire process for delivering, testing, and optimizing our game with Supersonic was streamlined and efficient.

"The Supersonic team was very patient as we worked together to lower CPI. In the end, our patience paid off - we’re now in the top charts and scaling profitably."

During the entire publishing process, the Supersonic team was very patient as we worked together to lower CPI - they were also collaborative, transparent, and professional. In the end, our patience paid off - we’re now in the top charts and scaling profitably. We’re continuing to make improvements to Going Balls and we look forward to building more hit games with Supersonic in the future.

On Android in the US