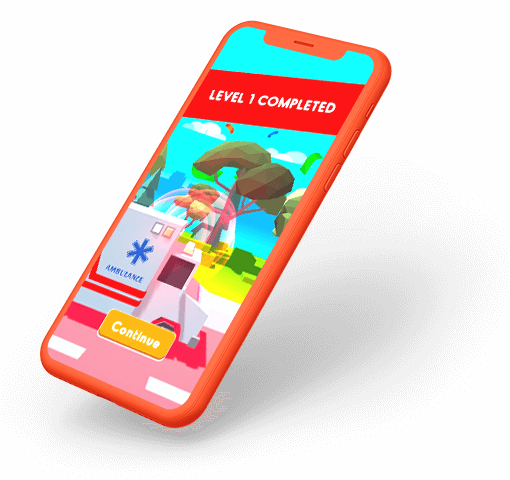 Five Bits is an international game development studio based in Panama whose hit app Fit the Fat and its sequels have attracted over 44 million downloads worldwide. Manuel Cabarcos and Joe Guerra, the co-founders of Five Bits, partnered with Supersonic to publish their latest game, 911 Emergency Dispatcher. Together with the Supersonic team, they grew the game into a hit that reached #1 on iOS, even surpassing TikTok as the most downloaded app on the App Store.

Read on to learn Manuel and Joe’s story about the success of 911 Emergency Dispatcher and how working with Supersonic helped them achieve these results.

Our first experience developing apps professionally was with a social media app called Deciderr that we self-published in Panama. It was an excellent learning experience about the mobile app industry and monetization. From there we moved into game development, as we saw it was possible to earn a profit more quickly. We also both have a passion and appreciation for gaming that goes back to when we were young, which inspired us to design the types of games we love playing.

The first game we created was Fit the Fat - it quickly went viral and reached the top charts in over 80 countries and achieved over 13 million downloads. We decided to design different  sequels (Fit the Fat 2 and 3), which ended up taking us 1-2 years to develop and took up a lot of our resources and time. While we were working on these projects, we saw the rise of hyper-casual games and the benefits these types of games had - like being quicker to develop. So after we launched Fit the Fat 3, we pivoted our focus and started designing hyper-casual games.

Finding a partner as fast and flexible as us

We quickly recognized the need for speed and efficiency when publishing games in the hyper-casual industry. For one of our first hyper-casual games, Border Patrol, we worked with another publisher but we’ve always had Supersonic on our radar - we even spoke with Guy Ferber, Business Development Director at Supersonic, when Supersonic was in its earliest days.

"Supersonic was a better fit for us. They’re flexible, fast, and transparent - and we can collaborate with pretty much everyone on their team."

Given our previous publishing experiences and after much thought, we recognized that Supersonic was a better fit for us and began testing new prototypes for our other games with them. They’re flexible, fast, and transparent - and we can collaborate with pretty much everyone on their team. Also, Supersonic has an incredibly quick response time that lets us improve our game and get to launch faster.

Capitalizing on the decision-making trend

We began prototyping our games with Supersonic, and they quickly saw our potential. The initial idea behind 911 Emergency Dispatcher came from watching the trending hyper-casual games in the top charts and seeing the rise of the decision-making sub-genre. We also had an idea for a game using a decision-making mechanic that we prototyped before 911, so this control was already on our minds.

As we were brainstorming with Supersonic, the concept of an emergency dispatcher came up. Once we paired the mechanic and concept together, we created and tested the prototype with Supersonic - the $0.13 CPI proved this concept had incredible potential and could be a huge hit.

As we began building out the game, Supersonic suggested adding mini games, which they saw performing well in other decision-making games like their game Chat Master. This combined with expanding the number of levels helped improve in-game metrics and achieve the following:

As we moved into soft launch, we started integrating user feedback to improve and optimize gameplay ahead of global launch. For example, some of the feedback left by users mentioned a level was too challenging - we then changed the design so that instead of users having four ways to fail in the dialogue, they just had two.

Supersonic also worked with us to further diversify and expand the game design while simultaneously optimizing our monetization strategy. A few of the changes we worked together on included:

All of our game tweaks and the successful creatives we designed together with Supersonic helped us scale profitably and quickly. We saw extremely good performance especially on social channels - we had a $0.05 CPI on TikTok in the US.

"In just under 3 months, we reached global launch, attracted millions of downloads, and got to the #1 spot across all categories on iOS. Even months after launch, the game is still in the top 100 in the US."

In just under 3 months, we reached global launch, attracted millions of downloads, and got to the #1 spot across all categories on iOS, beating out TikTok for the top spot. We remained in the top 10 games on iOS for over a month and in the top 10 on Android for 3 weeks - even months after launch, the game is still in the top 100 in the US.

Continuing to collaborate and ideate

We achieved amazing results with Supersonic, and we’re still continuing to build on our success. Now, we’re localizing the game for global audiences in locations like Russia and Indonesia - and we’re building out more mini games.

The process of working with Supersonic is all about teamwork and sharing ideas. It was important to us to work with a publisher that lets us focus on what we do best: ideating on amazing concepts and honing our game. Supersonic was always eager to brainstorm with us and brought their expertise and insights to the table to turn our creative ideas into executable, successful game designs. We’re looking forward to continuing this partnership and publishing future hits together.

Across categories on iOS in the US