Grab Master gets to #3 on Android with Supersonic 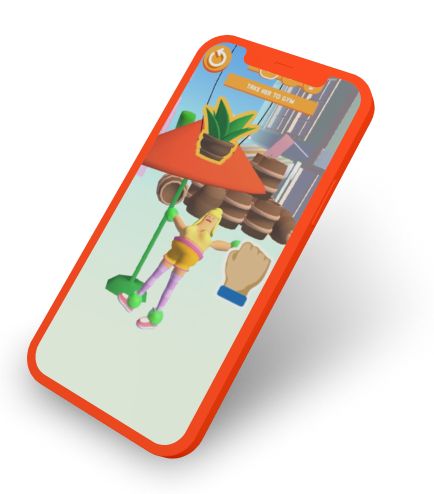 Established in 2019, Ging Games is a game development studio based in Ankara, Turkey that’s built on an ethos of creating mobile experiences for everyone, everywhere. Their portfolio of casual and hyper-casual titles just grew by one with the launch of Grab Master. Hear from Necmi Lider Serçemeli, Founder of Ging Games, as he discusses what it was like partnering with Supersonic to grow Grab Master to #3 on Android in the US and improve profitability. 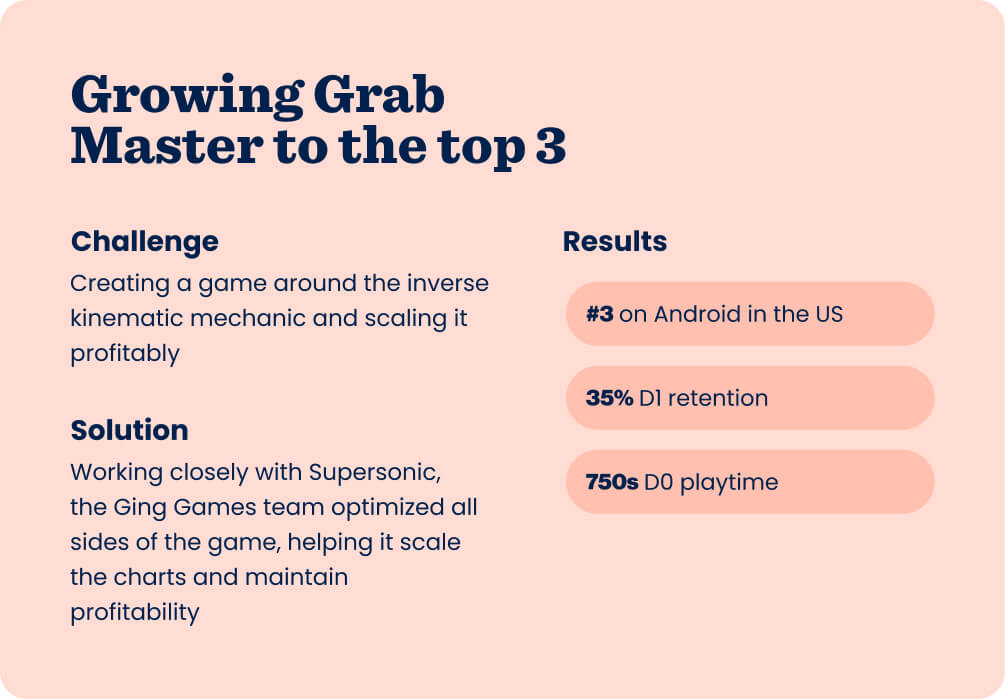 It starts at the mechanic

We wanted to create a game based on the inverse kinematic (IK) mechanic with animation blending - users need to tap and drag backwards to move the character. Using the inverse kinematic mechanic with custom-made animations enhances the storyline and feels unique, which boosts user engagement. There were other games in the top charts using a similar rag doll mechanic, like Move People, that let users pose a character using IK. But we wanted to create a dynamic experience where the characters are constantly on the move - the environment and storyline change and evolve throughout this movement.

Pivoting from our initial theme, we built a prototype that still featured this mechanic, but with everyday scenarios and situations that always ended in a positive way. The concept encourages users to make good decisions, like getting a character to wake up and catch the bus to school.

When we tested the initial prototype with Supersonic, the results showed our game had promise and room to grow:

Collaborating with a team invested in our success

As we began growing Grab Master with Supersonic, we worked closely with the entire team. We got game design feedback that helped expand the game and enhance the narrative, like A/B testing a voice-over feature, which was trending on Tik Tok and helped improve marketability.

For creatives, we tested hundreds of variations with the Supersonic creative team - over 200, in fact. We worked tirelessly together to find the winning creatives, then we used these to inform our game design and boost in-game KPIs, like retention and playtime.

On the monetization side, Supersonic was a huge help because initially, we didn’t see any clear breaks within our levels to show ads. So, we relied on interstitials at the end of the levels only, which limited our monetization potential. The Supersonic team ran A/B tests like testing interstitial timing and placement, to find opportunities to increase revenue. For example, they tested mid-level interstitials at different times, which led to a boost in ARPU. 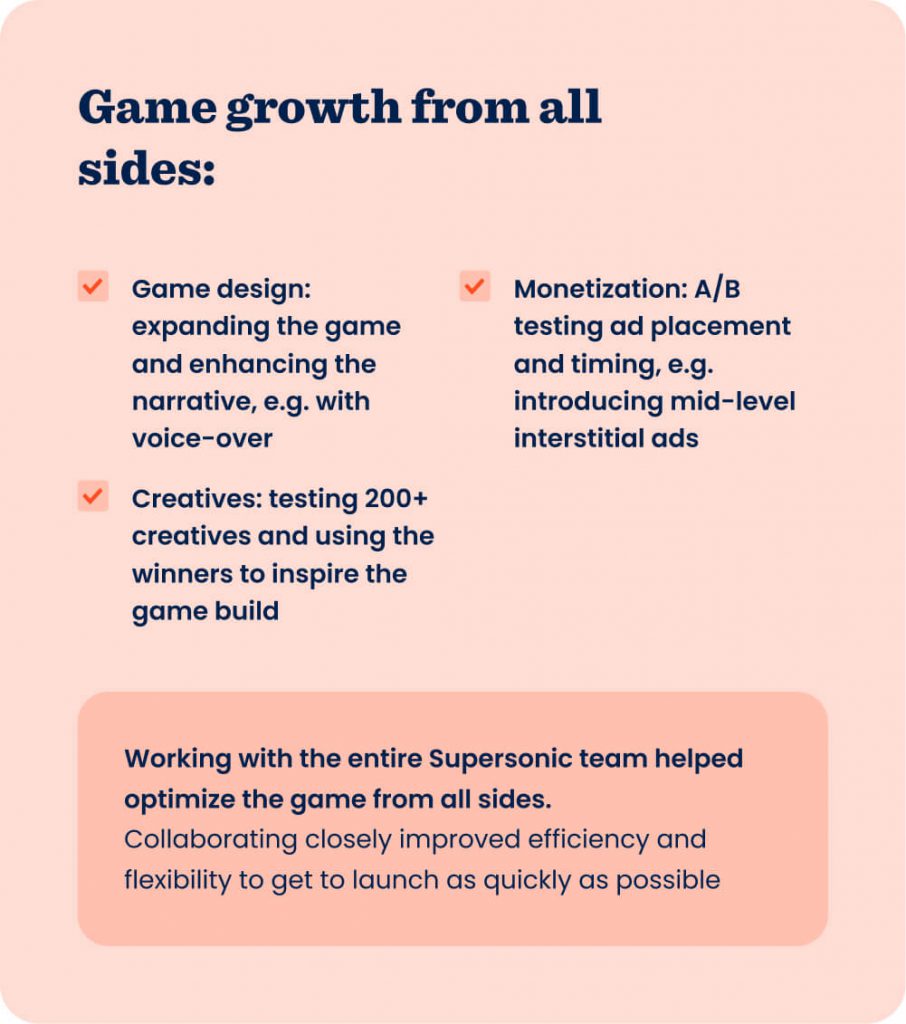 While working across all sides of the game with Supersonic, we saw how flexible they were and that they adapted with us as we grew the game together. We were always able to reach them, they stuck to our deadlines, and when we asked for ideas for everything from monetization to game design, they readily provided suggestions. Growing Grab Master felt like a truly collaborative effort, and we could sense how much the Supersonic team believed in our game - and in us.

The benchmarks we needed to reach to get to launch were always clear, which was very refreshing. When we’ve worked with other publishers in the past, we never had a clear grasp of their benchmarks or what improvements we needed to make to get to the next step. Supersonic always gave us transparency into our game’s performance, telling us what we needed to achieve next, and the feedback we could implement to get there.

"The benchmarks we needed to reach to get to launch were always clear. Supersonic always gave us transparency into our game’s performance."

We quickly reached launch, and our game’s KPIs had improved - now, D1 retention was 35% and D0 playtime was 750s. Grab Master reached #3 on Android in the US, and we’re continuing to work with the Supersonic team to optimize the game and improve profitability. Working with Supersonic propels us to keep going forward to improve our game and our skills - we truly appreciate their communication and transparency. 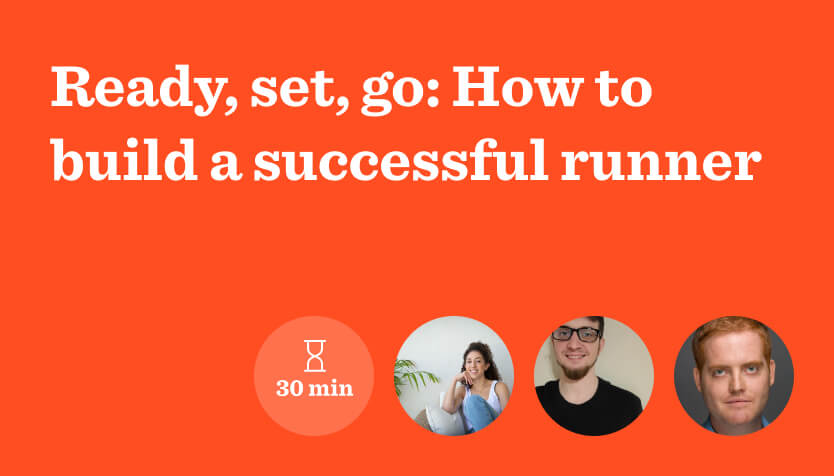 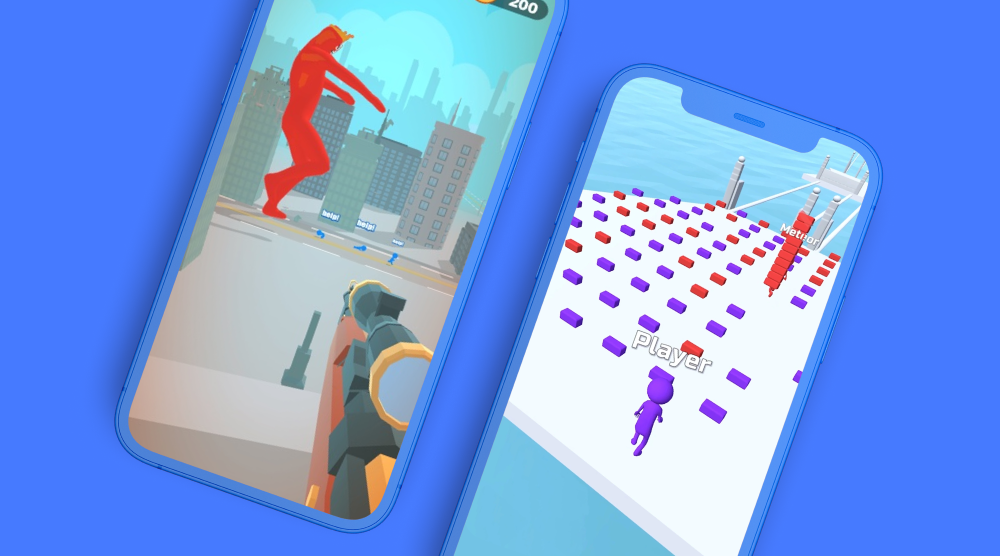