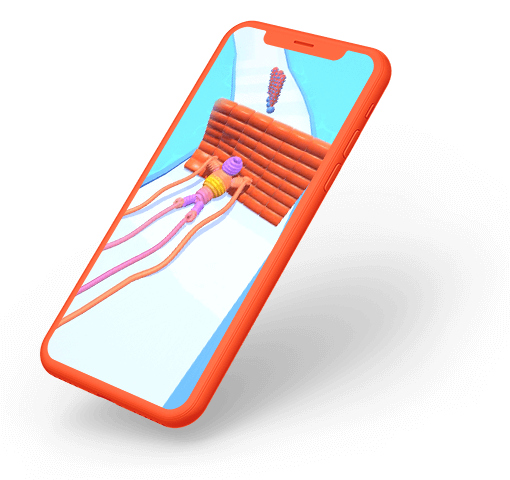 Eduard Musoiu is the solo developer and founder of Casual Hit Studio, a hyper-casual development studio. For his latest launch, Rope Man Run, Eduard partnered with Supersonic to grow the game into a profitable hit and reach the top of the charts. Hear his story of getting into hyper-casual development, the inspiration behind Rope Man Run, and his experience working with Supersonic to reach the top 5 on both app stores and achieve an ARPU D0 of $0.35. A 12-year old’s hobby turns into a profession

I’ve been designing games since I was 12 as a hobby, but when I saw the success of Flappy Bird, I realized I could build hyper-casual games that reached and impacted millions of users across the globe. Before that game, I didn’t know hyper-casual titles could achieve such scale, profitability, and popularity.

From that point on, I focused on developing hyper-casual games as my profession. It’s also far more efficient for a solo developer like me to make simple and fast games like these - they suit my skillset and are personally what I enjoy playing on my own phone.

Getting inspired by the top charts

To help inspire my next game ideas, I’m always looking at the top hyper-casual charts. I often see what’s trending then apply my own twist to create a new concept.

Rope Man Run came to mind when I saw other games in the charts featuring characters that assemble and disassemble - it’s like a gain/lose mechanic that affects the character directly. As I was going to bed one night, I had the idea to apply this trend to a game featuring a character made of rope. Though I wasn’t sure how to make the character gain/lose rope yet, I built a simple prototype and began running CPI tests with Supersonic.

During our initial testing on Android, the game’s CPI was $0.30-$0.40 - which signaled it had some marketability potential, but room for improvement. Thanks to YouTube videos like the one below with over 153 million views before the game was even published, we got early confirmation the game had marketability potential and was worth continuing to build out:

With the help of the Supersonic motion design team, we tried testing many new versions featuring different mechanics to bring CPI down. Our hard work paid off - we tested a video featuring a runner mechanic with obstacles that had a CPI of $0.18. From there, we started building out the game further and began running many A/B tests. 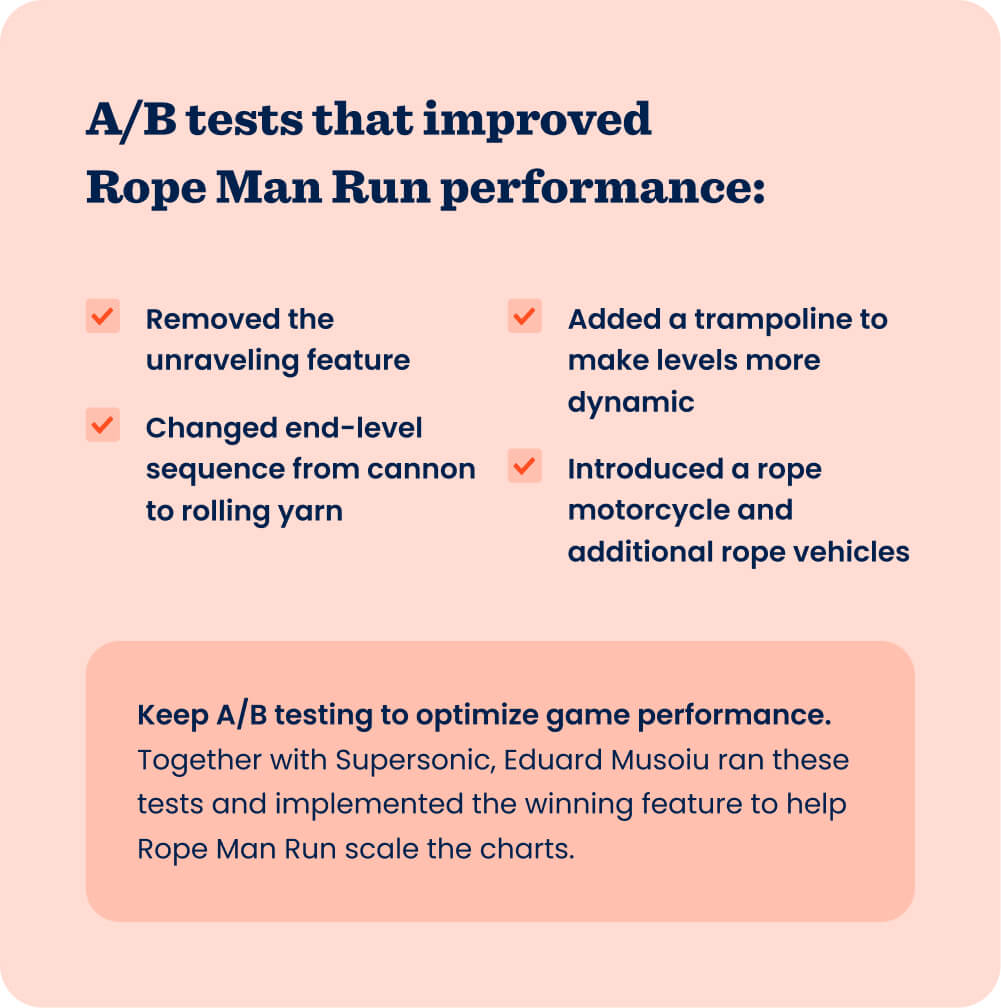 We began by A/B testing many of the game’s elements to improve KPIs like retention and playtime. These included removing the unraveling feature to make the game less challenging. In the past, even if users weren’t hitting any obstacles, the character would unravel. Now, though, they just need to keep running and avoid obstacles to stay intact.

We also changed the ending sequence of each level - it used to be a cannon then we tested an unraveling yarn feature where the character falls and players collect currency (diamonds). This presented a monetization opportunity, too, that we capitalized on by adding rewarded video that users could watch to get more gems. We also tested adding a trampoline to jump to a higher platform and create a more dynamic gameplay experience.

Together with Supersonic, we built out the levels and worked closely on the design - generally we focused on making levels less challenging. For example, we identified parts of a level with high user dropoff then gave players a boost at that point so they could reach the goal.

These A/B tests and level design changes improved in-game metrics and helped us climb the charts while making a significant profit. We achieved: Persevering with a partner

Supersonic believed in my concept from the beginning. Even though we ran many tests and changed the game significantly, with their support and collaboration, we cracked the code of CPI and boosted in-game metrics. I felt I had a partner in the entire team in addition to receiving helpful support and resources, which were all very helpful for me as a solo developer.

"Supersonic believed in my concept from the beginning. I felt I had a partner in the entire team, which was very helpful for me as a solo developer."

They also shared tips and insights and were always transparent at each step of the publishing process, like sharing KPIs and involving me during A/B testing. Even after launch, we’re testing and making improvements to the game, and Supersonic continues to be a trusted partner.