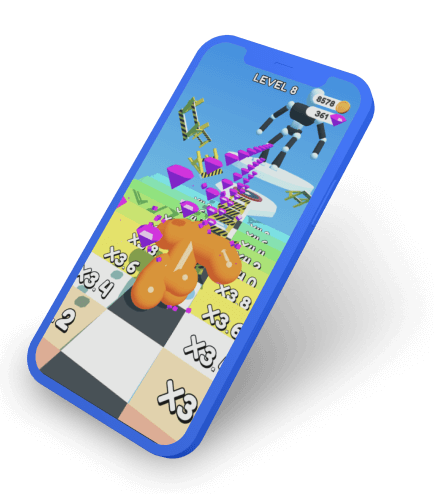 VectorUp Games was founded by solo developer Carlton Forrester in Virginia, USA. Once he got into hyper-casual development in 2018 after a career in software development, he published his first two games with Supersonic while working at his previous studio, Fogwatt Games. In 2021, Carlton formed VectorUp Games and continued working with Supersonic because of his positive experiences in the past, great results, and trust in them. Now Tall Man Run is his fourth game with the team - and second #1 hit. Here, he shares his experience partnering with Supersonic once again to turn Tall Man Run into a profitable title that reached #1 overall on Android and #1 in games on iOS in the US. 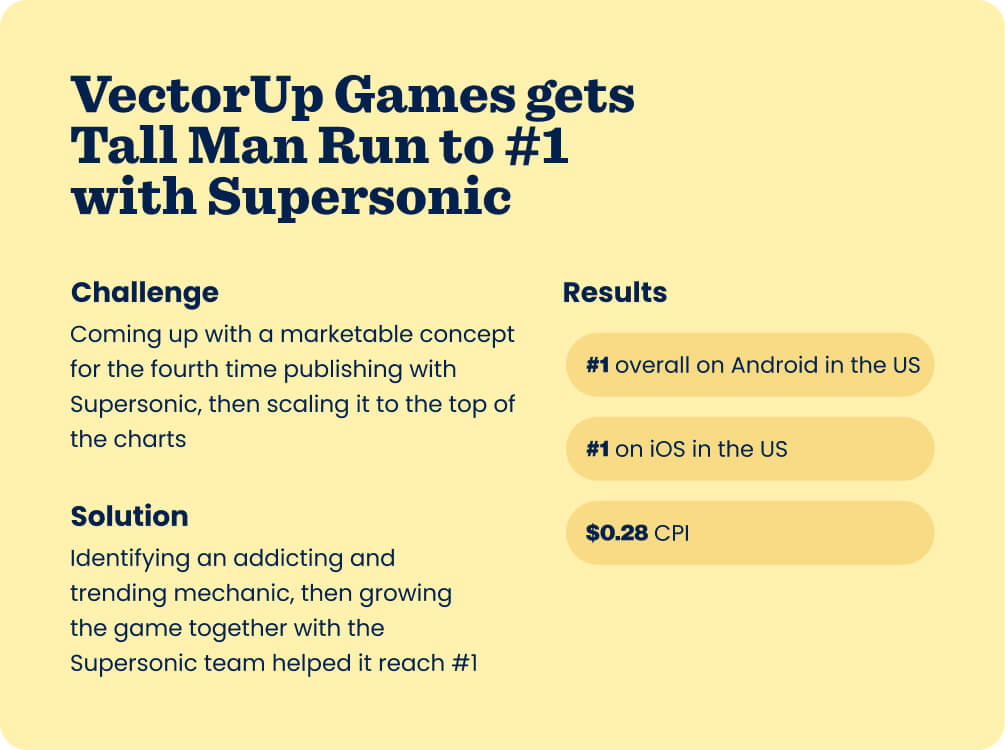 Building a game around an interesting mechanic

I often think of new games by searching for an addictive mechanic then building a game around that. For Tall Man Run, I was drawn to the trending mechanic of character transformations that I saw in other runner games at the top of the charts, like increasing the length of a character’s neck or making them fatter/thinner. From here, I combined the transformations I saw into one - the character in my game grows width-wise and in height. From the start as I was building the prototype, I could tell this was an interesting and humorous mechanic. When I tested it with Supersonic, it confirmed what I believed - CPI was $0.40 and in-game metrics were hitting the right benchmarks that proved the game had potential.

Unlocking CPI with the right creative

Together with Supersonic, we began building out the game to make it more dynamic and started introducing monetization features. For example, we:

The Supersonic team took initiative on running both gameplay and monetization A/B tests, like testing the speed of gameplay (e.g. sliding to go faster), which led to an uplift in ARPU D7 of 6.6%. They also tested the level sequence, including when to show the full level completion of kicking a huge character in the head. Though simple, this end-level sequence succeeded in boosting retention - it made users feel an urge to kick the character, so they continued to play through the levels to achieve this.

At the same time we were optimizing in-game features, I worked together with the Supersonic creative team to lower CPI. I have a background in design that I use for all of my titles to help me think of ad concepts that reduce CPI and increase scale. By iterating and implementing feedback from the Supersonic team, we found a creative that reduced CPI to $0.28 - this helped us scale more affordably and improve profitability.

Getting to #1 for the second time

With all of these in-game improvements and creative optimizations, we were ready for global launch. We climbed the charts quickly - we reached #1 in games on iOS and #1 overall on Android, taking over the top spot from popular apps like TikTok.

This was my fourth published game with Supersonic and our second #1 hit after Bead Sort, which was published while I was at Fogwatt Games. And appropriately, we published Tall Man Run right around the second anniversary of publishing Bead Sort.

At this point after working on so many games together, I almost feel like part of the Supersonic family. I’ve learned a lot from working with them and continue to grow my skills as a developer. One of the most important lessons I’ve learned is the need to include more relatable features in my games for them to be more marketable and successful - working with Supersonic has taught me that as I come up with new concepts, I should always keep marketability in mind.

"I almost feel like part of the Supersonic family. I’ve learned a lot from working with them and continue to grow my skills as a developer."

Together with the Supersonic team, we’re still improving Tall Man Run while testing prototypes of other game concepts. Look out for game #5 soon!