How to turn a hyper-casual trend into a marketable concept 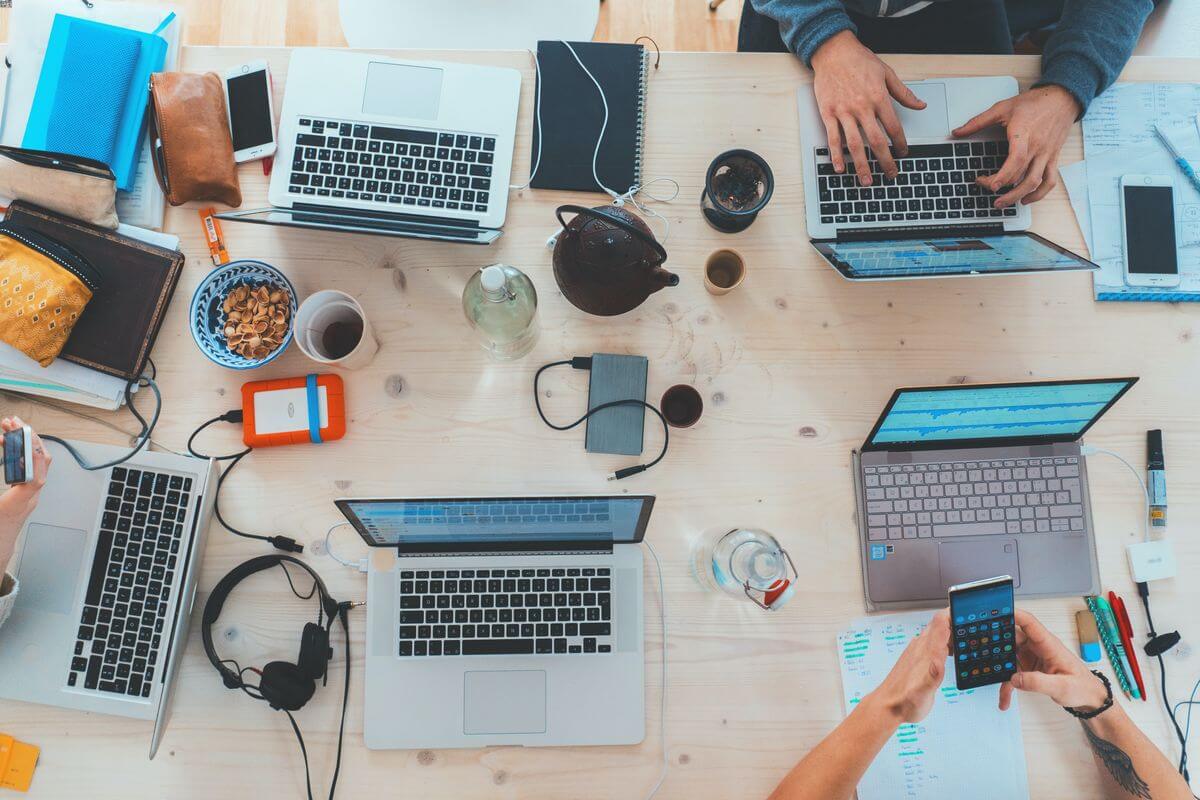 It’s one of the most common pieces of advice we give to developers for ideation: look at the top hyper-casual charts to inspire you. But in action, this tip doesn’t just mean going to an app store and looking at a few game descriptions and screenshots. So, what’s the best way to analyze what’s trending on the market and turn it into a hyper-casual concept with a likely low CPI?

That’s where Uri Ron, Market Research Expert at Supersonic, can help. In this article based on his session from our SuperMonday webinar, Uri dives into the top hyper-casual trends and discusses tips for applying them to your own concept to design a likely marketable game. Catch the SuperMonday session at the end of this article, and keep reading for the trends and tips that lie ahead.

Looking at the hyper-casual charts from the past year, it’s clear that runners, the multiplier mechanic, games inspired by TikTok, and puzzles took over the top. Let’s dive into each of these trends to help inspire your next game idea. 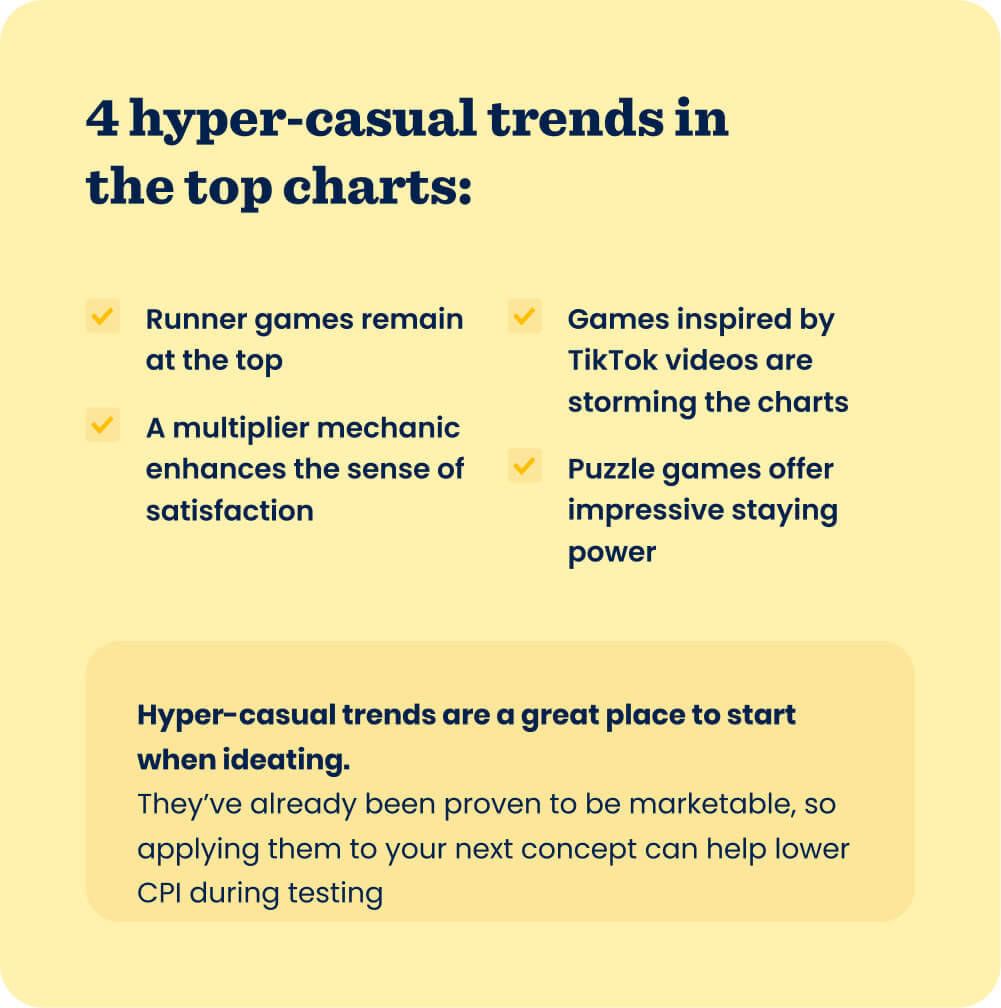 It was another big year for runner games - many achieved top spots in the charts, like Destiny Run from Voodoo, Blob Runner 3D from Zynga, and Count Masters from Freeplay.

There were four distinct types of runners that emerged this year: 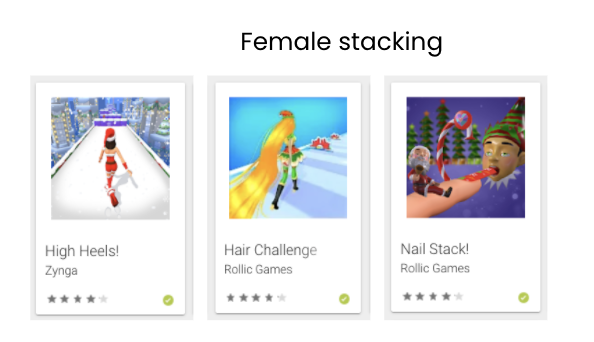 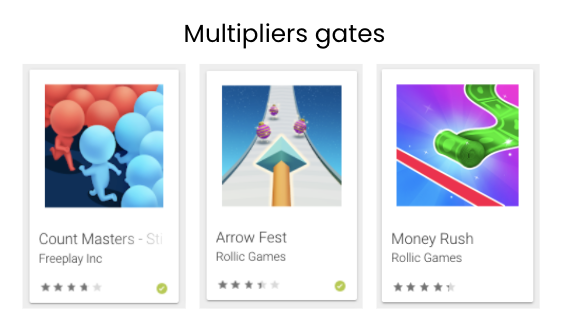 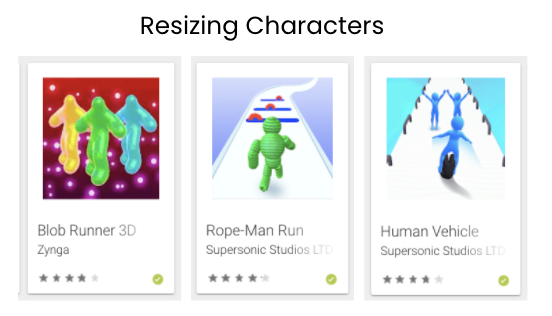 The popularity of runners is holding strong, and almost any game can be turned into a runner - this is good news if you want to capitalize on the trend. For example, Get Rich 3D clearly inspired Investment Run by Homa Games

Taking the successful concept of Get Rich and reimagining it as a runner helped Investment Run combine the appeal of a runner game with an investment theme that already proved it was marketable. 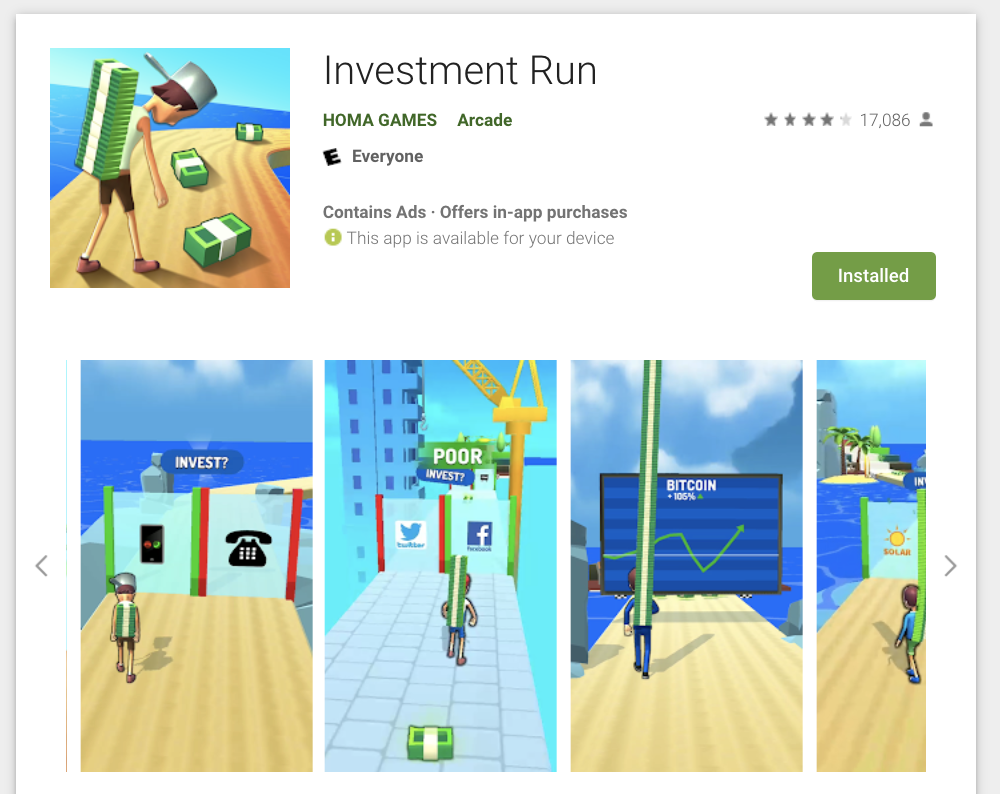 You can also try changing the camera angle or point of view of an existing game so it feels more like a runner. If there’s a hyper-casual simulation game that uses a side camera angle, for example, you can turn it into a runner by showing gameplay from behind.

2. Games with a multiplier mechanic look and feel satisfying

The multiplier mechanic appeared in many titles in the top hyper-casual charts recently. Games like Bounce & Collect and Castle Raid - both from Voodoo - used multipliers to demonstrate progression in a clear, visual way that enhanced the sense of satisfaction. The mechanic translates well into creatives, too, because you can show it easily and clearly within the first few seconds of a video - this is key for building successful creatives and lowering CPI

Our game Escalators saw the multiplier mechanic trending in the top hyper-casual charts and integrated it into gameplay, which helped lower CPI from $0.50 to $0.35. After polishing the mechanic further and building out the game, it went on to reach top 20 on both app stores while maintaining profitability.

Many hyper-casual games are using balls to showcase the multiplier mechanic. Titles like Balls and Ropes by Moonee and Multi Maze 3D by Crazy Labs are both popular examples featuring balls as the main element. You can try out different elements and see which results in a lower CPI - right now it’s balls, but stickmen, female figures, or a wildcard like candy or bowling pins could be the feature that unlocks your game’s marketability power.

TikTok has over 1 billion monthly active users, and trending videos on the platform can achieve hundreds of millions of views. Hyper-casual developers are taking these trends and turning them into hit games with high marketability power. Throughout the past year, we’ve seen the charts reflect the rising trends on TikTok with games like Fidget Toys 3D from Fidget Dev, 100 Mystery Buttons from Panteon, and Candy Challenge 3D by Idil Morgul at the top.

You can turn a trending TikTok hashtag or video into a marketable hyper-casual concept, like Color Match did by transforming the color matching trend into a scalable hit. Color matching proved its potential with videos on the platform that achieved over 18 million views - capitalizing on this trend while it’s hot has helped the game achieve over 2.7 million installs on iOS in 90 days

In this blog, we go into more detail about how you can take a trending TikTok video and turn it into a hyper-casual game concept, but here are some of the key tips:

5 of the top 12 hyper-casual games last year fell under the puzzle sub-genre, and many stayed in the top charts for months - they’ve shown their potential for having incredible staying power. Designing a hit hyper-casual puzzle game doesn’t necessarily mean creating a brand-new concept, either. Instead, you can iterate off of an existing mechanic or concept to build an engaging and marketable game.

For example, Stacky Dash was inspired by other puzzle games that used a collecting/maze mechanic, like Roller Splat! by Voodoo and AMAZE! by Crazy Labs. Expanding upon it by introducing a stacking mechanic (also trending) helped the game achieve long-lasting success. Once launched, Stacky Dash was immediately profitable and even 18 months after launch, it remains in the top 40 games.

Look to the past

Not all hit games today were inspired by trends from last month, three months ago, or even the past year. Take a look at hyper-casual games in the top charts from a few years back and take note of any that could be marketable concepts today. Many previous trends are still familiar and engaging and could yield low CPI during testing. Previous trends that share any similarities with what’s popular today or that you can easily imagine as a fully realized hyper-casual game are good places to start.

Take a look at hyper-casual games in the top charts from a few years back and take note of any that could be marketable concepts today.

What was popular back then could make a comeback this year - just look at the trendy drawing games from 2020 like Draw Climber and Scribble Rider (both from Voodoo) that have returned to the top charts again in different forms with hits like Draw Weapon 3D and Draw the Line 3D from Supersonic. So as you think about turning trends into hyper-casual concepts, consider looking to the past as much as the present.