Car Cops reaches #4 on Android and scales profit with Supersonic 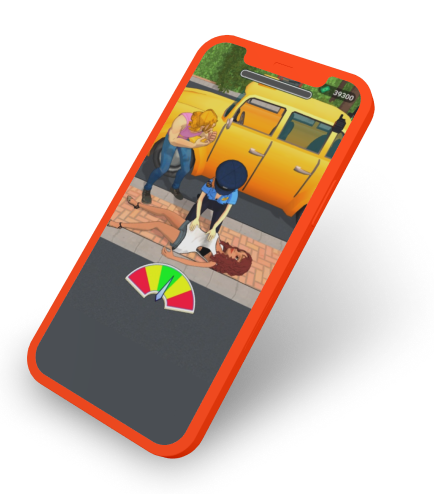 Ice Cube Studio is a three-person mobile game development company based in China that was recently established. They started developing hyper-casual games because these games take less time and resources to develop, which is a big advantage as a small and agile studio. To publish their first game, Ice Cube Studio turned to Supersonic - together they made improvements and scaled profitability, getting Car Cops to #4 on Android in the US where it stayed in the top 10 for over a week. Hear from Yunfei Zheng, Lead Developer of Car Cops, about what it was like partnering with Supersonic to achieve these results and publish a profitable hit. 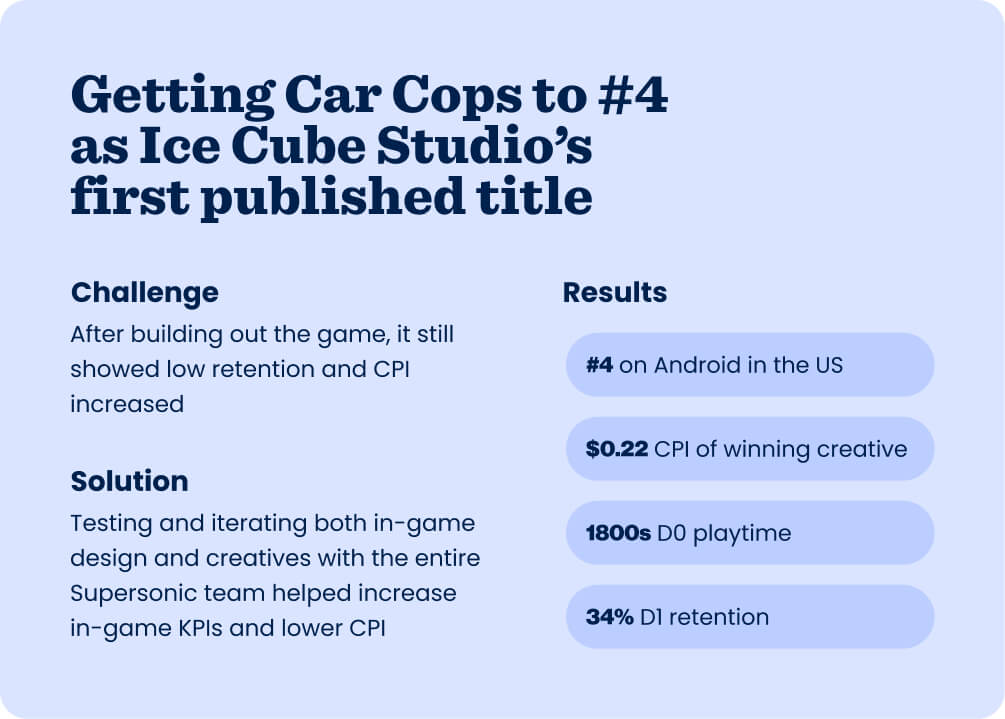 Building structure into a PC game brought to mobile

The idea for Car Cops came from a PC game I enjoyed playing - I believed we could simplify the concept to turn into a hyper-casual game. So we built a prototype and submitted it to Supersonic, where it showed promise from the beginning with a CPI of $0.37.

As we started to grow the game together with Supersonic, we focused on adding more levels and creating a structure for them. We decided to make each level correspond to one day and each new day/level would start when players “clocked in” to their shift. Soon, we built out over 60 levels, added mini games, and introduced new meta, like skins.

At this point, D0 playtime was promising at 1400s, but D1 retention was 29%, which showed there was room for improvement. This indicated players enjoyed the game, but our levels needed more depth and the game was missing a long-term goal. Also, CPI started increasing - we needed to start designing new creatives that kept up with the new levels and content we added. So with the Supersonic team’s feedback, we started iterating and testing to improve in-game metrics and lower CPI.

Introducing an idle arcade feature and cracking CPI to reach #4

Idle arcade games are trending in hyper-casual, and they’re known to have higher in-game metrics than other genres due to their greater depth. With this in mind, we tested an idle arcade element that lets users upgrade and decorate the main character’s home. After seeing its positive impact and integrating it across users, the feature increased D1 retention to 34% and improved D0 playtime from 1400s to 1800s.

We were running other A/B tests with Supersonic, too, to keep boosting in-game metrics and improve our monetization strategy. For example, testing interstitial timing revealed a winner that improved ARPU D3 by over 10%.

At the same time, the Supersonic creative team was working on lowering CPI by finding the right combination of creatives. We now had many levels and much more content than our original prototype - they ran a lot of tests to determine which was the right gameplay to show. Through their constant iterations, they managed to find a winning creative set that lowered CPI to $0.22 on iOS.

With all of these game improvements and creative optimizations, we were ready for launch. Our game became profitable very quickly and scaled the charts to #4 on Android in the US - it even managed to stay in the top 10 for over a week.

Support from all sides and full transparency

The Supersonic team provided support from every side of publishing: 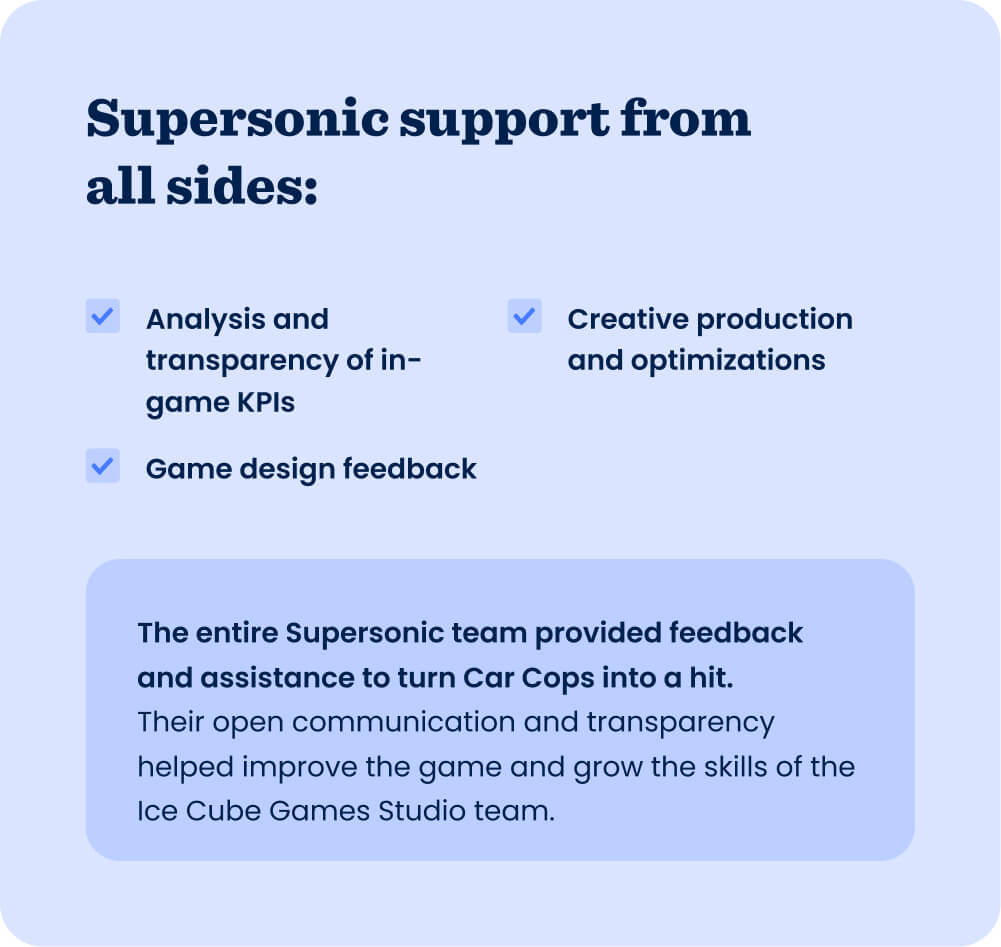 We got full access to our game’s performance along the way so we always knew where we stood and how we could improve. Combined with the timely and efficient feedback provided by the Supersonic team, this helped us achieve amazing results and made us feel involved at every step. As a new and small studio, we felt fully supported by Supersonic and learned a lot throughout the publishing process - I believe we’ve grown our skills as an entire team.

"As a new and small studio, we felt fully supported by Supersonic and learned a lot throughout the publishing process to grow our skills as an entire team."

Together, we successfully published our studio’s first title, and now we’re looking forward to many more games in the future together.