Garawell Games reaches the top again with Supersonic, getting Color Match to #1 overall 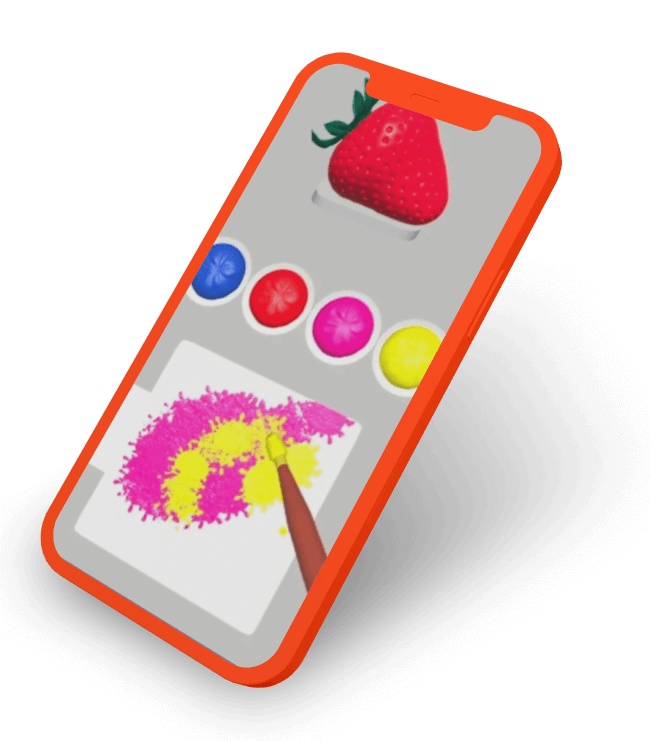 Garawell Games is a mobile game studio based in Turkey that’s behind the hit game Bridge Race, which together with Supersonic they grew into the most downloaded hyper-casual game in the world for 2021. Since the success of Bridge Race, the team has continued prototyping new ideas with Supersonic, which led to their most recent hit - Color Match.

Here, Nebih Başaran, CEO and Founder at Garawell, discusses what it was like working with the Supersonic team the second time around to get their game to #1 on iOS in the US overall, stay in the top 10 games for over two months, and generate a significant profit from day one.

From working with Supersonic on Bridge Race, we learned what it takes to make a hit game and what we could improve upon from previous prototypes. Now, we were ready to apply these best practices to our next title.

"From working with Supersonic on Bridge Race, we learned what it takes to make a hit game. Now, we were ready to apply these best practices to our next title.”

Since the success of Bridge Race, we’re more confident and have honed our vision as a studio. Our focus is on creating unique games with depth - and to do so across genres. We’ve also grown Garawell Games, hiring more developers - now we’re a team of 11. With Color Match, we’ve proven how our studio has grown and where we’re heading next.

Giving a trend a twist

The idea for Color Match goes back to a game we created and self-published in the past called Colour Merge 3D. This game already had a lot of depth as it gave users the ability to mix many different colors. For example, using just shades of red, green, and blue, users can create 1.7 million different colors. Once we saw the color match trend on Reddit and TikTok, we knew we needed to bring this concept back to life.

Seeing this trend across social platforms inspired us to believe that the color merge concept could be marketable in a new form. Plus, the game has ASMR elements, which was a popular feature in other top hits.

We didn’t see any other hyper-casual games yet with our mechanic - we quickly jumped on the opportunity to design a unique game that took the color matching trend from social media and gave it a twist. Instead of painting a small part of a piece of paper like in the trending videos, players in our game paint on a piece of paper stacked on another - then that piece is split away and used to compare to the object. This gives users more room to paint and improves clarity of gameplay. From here, we built a prototype and began testing with Supersonic.

The initial tests weren’t as promising as we wished - our first prototype had a CPI of $0.53.

But from our previous publishing experience with Supersonic, we knew the difference that the right video could make. So we started iterating on the CPI video and testing new versions - we soon found one that lowered CPI to $0.29.

As we moved onto the next phase of publishing and began growing the game, our KPIs were now: 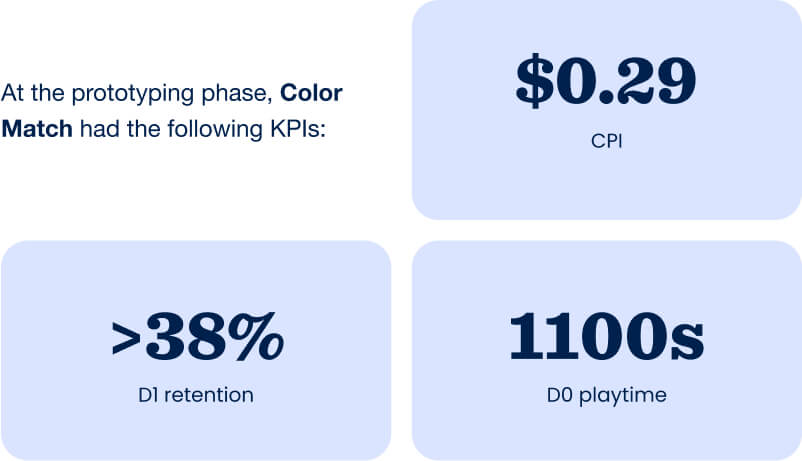 At this stage, we began A/B testing with a focus on improving later-day metrics. The game successfully hooked users in the beginning, but they quickly dropped off - indicating the game was too simple and didn’t give users the sense of satisfaction that comes with progression. We were motivated to improve later-day KPIs since this would help monetization, too - the longer users play, the more ads we can show to generate revenue. 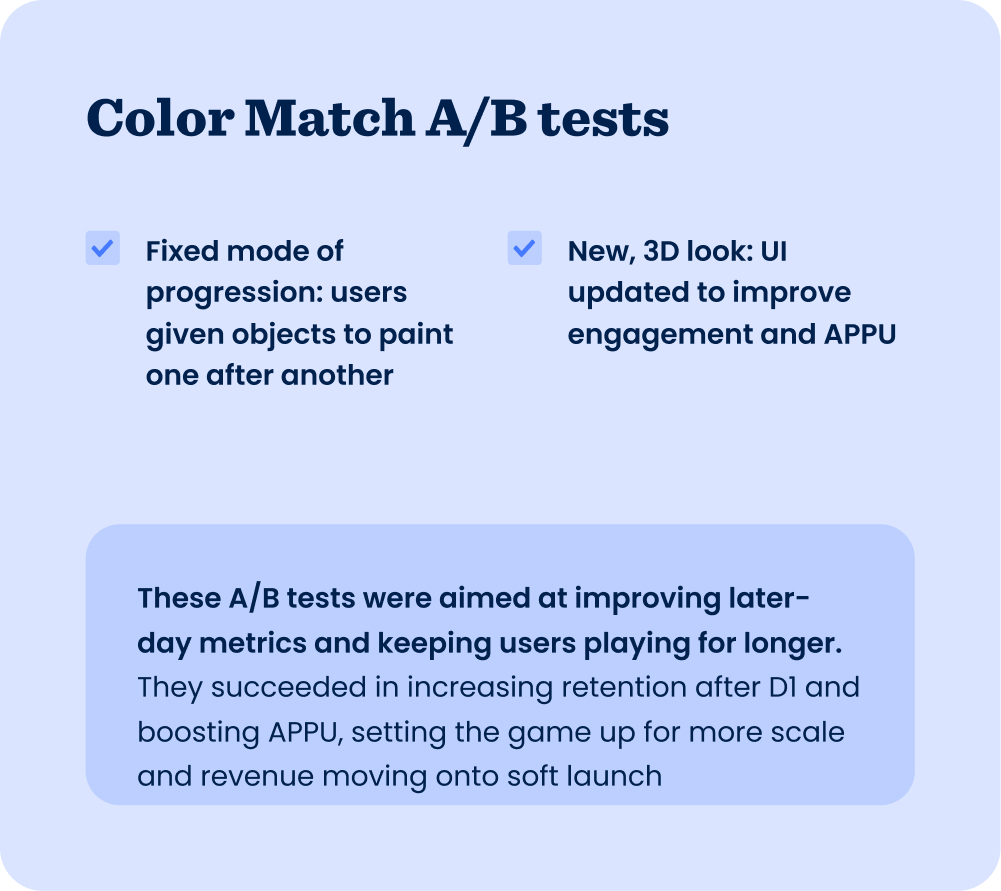 Together with Supersonic, we tested a new way for users to progress through the game. Initially, users picked an item from a set of shelves, painted it, then returned to the shelf to pick another object. We A/B tested gameplay that removed this freedom of choice - players received on object, painted it, then received another one. This created a fixed progression that users enjoyed, indicated by the boost to in-game metrics.

We also tested a new, 3D UI to make the game more engaging and less simple - we even made the menu screen look more advanced, with fully designed buildings in the background. This new version improved APPU by 75%. APPU is an accurate indicator of LTV, so the improvement proved the 3D version was better for retention and revenue.

These A/B tests - along with many others - gave our later-day metrics a boost, and we were now set up for success heading into soft launch. With the support of the Supersonic team and applying what we learned from the soft launch stage while publishing Bridge Race, we got to global launch efficiently. For example, we had learned best practices for implementing rewarded video and interstitial ads and were able to optimize our monetization strategy more quickly.

As we grew the game and went into soft launch, we implemented the winning versions on iOS from our A/B tests on Android. On iOS, the game had a significantly lower CPI - $0.10, which remained stable for over two months. This proved the game was more suited for an iOS audience - with the Supersonic team, we tailored our UA and monetization strategies for these users.

With an optimized game, valuable user base, and winning creative strategy all on our side, we scaled Color Match to #1 overall on iOS and top 10 overall on Android in the US. It’s remained in the top 10 games for over two months and is currently in the #3 spot

Working with Supersonic again was a great experience - and this time, our communication and feedback loop was even more flawless. We felt the support of the entire Supersonic team, communicating with 10-15 people across teams each week, from game designers to growth managers. For example, when we were trying to improve our video for the marketability test and lower the game’s CPI, we spoke with Lolita Snapkova, Director of Creatives at Supersonic. The entire team is accessible and willing to help and provide feedback at any step of the publishing process.

“Working with Supersonic again was a great experience. We can’t wait to see what we can accomplish together the third time.”

Color Match is another success story to add to the growing list of games we’ve published with Supersonic. As an ASMR game, it’s completely different than Bridge Race, which was an io game - with its success, we’ve proven our ability to build great games across genres. We can’t wait to see what we can accomplish together - no matter the genre - with Supersonic for the third time.